Eagles Flyers Phillies Sixers About Us Write For Us
Flyers-Jets: Game 19 Preview
K-Lot Podcast: Catching up after the bye week and previewing Dallas 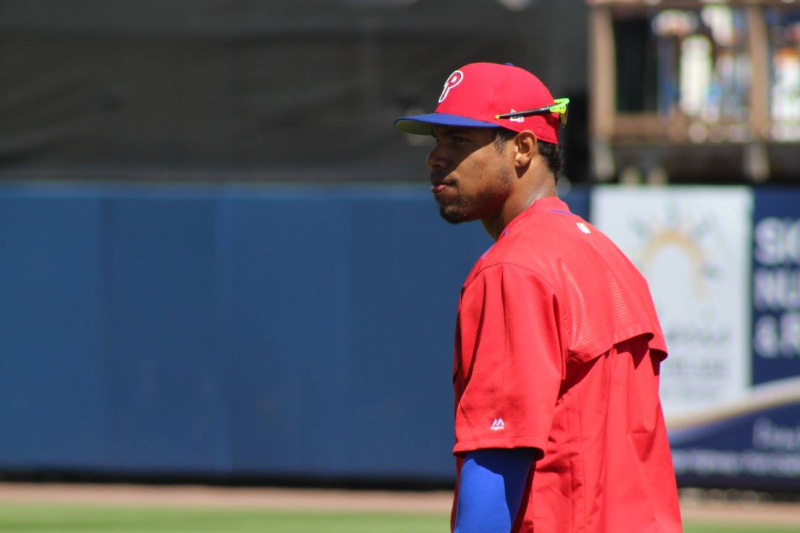 What will Nick Williams' role be with the Phillies moving forward? (Brandon Apter/SportsTalkPhilly)

After Nick Williams hit .288 with 12 home runs and 55 RBIs in his first 83 games at the major league level, many began to pencil him in as a long-term cog in the Philadelphia Phillies outfield. His call-up on June 30 did seem to provide a spark to a lineup that desperately needed one after a miserable first half.

But there's reason to believe the Phillies front-office may view Williams more as a fourth outfielder or a trade chip than someone that's part of their long-term core.

If the Phillies are to sign someone like Santana, or a free-agent that will occupy first for a majority of the team's games, that would push Rhys Hoskins back to left field, something Heyman said Thursday that they seem comfortable with. Hoskins did play left field more frequently than first base after his August call-up last year, but that was seemingly to temporarily accommodate Tommy Joseph. Hoskins is a natural first baseman, one that fields better (and probably hits better) when he's playing first base. At the end of last season, it appeared likely that Hoskins would begin playing first base primarily for the Phillies in 2018.

Trending: Veteran Outfielder Jon Jay Would be a Good Fit For Phillies

However, if the Phillies do elect to have Hoskins play left field primarily for the foreseeable future, that obviously would have a direct impact on Williams. Williams is capable of playing all three outfield positions, so it's not as though he would be buried if Hoskins play left field. Still, it's fair to wonder just how frequently he would play if Aaron Altherr was pushing him for time in right field.

When Odubel Herrera was on the disabled list in late August and early September , Williams did play some center field. So he's capable of spelling Herrera when necessary. Herrera - as evidenced by his month of May 2017 when he hit .183 with 30 strikeouts - does have a tendency to get especially cold when he struggles. During those times, Williams could play center field, or play right field and push Altherr (more on him in a minute) to center field.

But for as cold as Herrera can get when he struggles, that's how warm he gets when he heats up at the plate. Sabermetrics speak extremely high of him as a fielder, and with that in mind, general manager Matt Klentak gave him what could amount to a seven-year deal last offseason. New manager Gabe Kapler, who is also very fond of analytics, raved about him in a radio interview shortly after being hired. So you don't get the sense that anyone other than Herrera will be playing center field most of the time.

So that leaves Williams as the fourth outfielder. There will be injuries, there will be slumps, there will be games in American League parks - it's not as though Williams will be forgotten about. But what is it about Williams that the Phillies front-office doesn't seem to be crazy about?

Anonymous Executive on Phillies: "I Have a Feeling They Will go After Someone Big"

Though he walked 20 times in 83 at-bats, he's just two years removed from walking just 19 times in 497 at-bats for Triple-A Lehigh Valley. Herrera was extended after a 2016 season where he walked quite a bit. J.P. Crawford walked 16 times in 70 at-bats in 2017, putting him on-pace for 115 walks in a 500 at-bat season. Despite Scott Kingery knocking on the door, the Phillies aren't going to give Cesar Hernandez away - he's led the team in walks three consecutive years. And the aforementioned Santana walked 88 times in 2017, which was actually one of the lowest totals of his career.

In other words, the current Phillies front-office values walks quite a bit. Perhaps they also worry that he won't be able to sustain the clip that he hit at in his first major league action. Klentak and company aren't the front-office that acquired Williams, and while they may think he has offensive value, it may not be as much as the previous regime did.

Williams defensive value may not be especially high to them, either. While he's capable of playing multiple outfield positions, he didn't grade out well analytically. In his first 83 major league games, Williams posted a -3.0 UZR, a -9.6 UZR/150 and -13 defensive runs saved (per FanGraphs). Altherr didn't grade out especially well either, but he did better than Williams, and unlike Williams, he doesn't have a history in the minor leagues of grading out poorly defensively.

Of course, there's no guarantee that the Phillies sign Santana or any other first baseman. Hoskins could very well end up starting at first base next year, allowing Altherr to start in left and Williams to start in right. But that the team appears to be so willing to move Hoskins to left may speak to how they view Williams long-term.

Whether Hoskins moves to left or stays at first, the Phillies outfield is going to become very crowded over the next few seasons. Any of Andrew Pullin, Roman Quinn, Carlos Tocci and Dylan Cozens could push for at-bats at the major league level in 2018. Next offseason, Bryce Harper headlines a free-agent class full of elite outfielding talents. The Phillies have spent three consecutive first-round picks on outfielders - Cornelius Randolph in 2015, Mickey Moniak in 2016 and Adam Haseley in 2017. Sooner, rather than later, they are going to have a surplus of starting-caliber outfielders.

Recent developments may be an early indication of the Phillies long-term plans for Williams: use him to acquire pitching or as an overqualified fourth outfielder. That's not necessarily a bad thing, but it may come as a surprise to some.