Eagles Flyers Phillies Sixers About Us Write For Us
Phillies Designate Appel, Claim Shortstop in Flurry of Moves
Despite Recent Skid, Too Early to Count Flyers Out

Top 25 Players to Ever Play a Game for the Phillies: No. 20, Cliff Lee

Cliff Lee was something of a mercenary during his career, which is strange considering how dominant he was at his peak. But if you wanted a starting pitcher to come in and lead your attempt to make a deep playoff run during the late-2000s, you may not have been able to do much better than Lee.

After a disastrous 2007 season, Lee wasn't on the Cleveland Indians postseason roster in 2007 when they came within one win of going to the World Series. However, he came back in 2008 with such a dominant season that it made it easier for Indians fans to stomach the fact that due to his impending free-agency, the Indians were forced to trade franchise icon CC Sabathia.

A year after Sabathia was dealt, the Indians traded Lee and Ben Francisco to the defending World Series champion Philadelphia Phillies in a July blockbuster. In 12 regular season starts for the Phillies, Lee went 7-4 with a 3.39 ERA. A strong second-half was a precursor to a historic postseason in 2009.

In Game 1 of the 2009 NLDS, Lee threw a complete-game against budding-star Ubaldo Jimenez and the Colorado Rockies. He pitched 7.1 innings and only allowed one earned run in the series-clinching Game 4 win. The Phillies only needed Lee once in the NLCS against the Dodgers, but he did his part there, allowing just three hits over eight innings in an 11-0 Game 3 win.

Lee was even more dominant in the World Series against the Yankees. The Phillies lost the series in six games, but Lee started both of the games that the Phillies won. He threw a complete-game in the team's Game 1 win at Yankee Stadium. He labored through seven innings in Game 5, but helped the Phillies to keep the series alive.

All in all, Lee's 2009 postseason was one of the most dominant in the history of the sport. Lee's four postseason wins in 2009 are tied with a slew of pitchers for third most in MLB history. The 47 strikeouts that he recorded during the postseason are tied with Hall of Famer Randy Johnson and 2003 World Series MVP Josh Beckett for second all-time. The 40.1 innings he threw in 2009 were eighth most in a single postseason in league history.

The Phillies, rather shockingly, traded Lee to the Seattle Mariners prior to the 2010 season. But as any good mercenary does, Lee just continued to ball.

2010, which was a contract year, was perhaps the most dominant individual season of Lee's career. He split the regular season between the Mariners and the Texas Rangers, throwing seven complete-games, posting a 3.18 ERA and a career-high 7.0 WAR (per FanGraphs).

Again on the national stage, Lee was dominant in the postseason. Though he ran out of gas in what turned out to be another World Series loss, Lee allowed just two runs in 24 innings across three starts between the ALDS and ALCS. He again was a thorn in the Yankees side, helping the Rangers to eliminate the defending World Series Champions in the ALCS for their first American League pennant in World Series history.

Lee became a free-agent after the 2010 season, and turned down larger offers from the Rangers and Yankees to return to the Phillies. In what became the most exciting calendar year in the history of the franchise, Lee joined a rotation that now featured Cole Hamels, Roy Oswalt and the late Roy Halladay. It became one of the most dominant rotations in the history of the sport, with Lee, Halladay and Hamels all finishing in the top-five in Cy Young Award voting in 2011.

The final four seasons of Lee's 13-year career were spent with the Phillies. In that time, he made two more All-Star Game appearances and became one of the more beloved pitchers in the history of the Phillies.

Lee never was able to win a World Series, but he was still one of the best postseason pitchers of his ERA. His rather short career will prevent him from being a Hall of Famer, but if there was a Hall of Fame that simply looked at peak dominance, Lee would be a shoe-in to have a plaque of his own.

If this was simply a countdown of the greatest Phillies of all-time, Lee's return to the Phillies after the 2010 season, even though it isn't an individual moment, would probably be here. If it were simply about his most memorable individual season, his 2008 American League Cy Young Award-winning season would be revisited. After all, he went 22-3 with a 2.54 ERA, in one of the best individual seasons in recent memory.

But if you asked a player who played in the league or someone that covered the sport during Lee's career what they think of when Lee's name is mentioned, the answer would be nearly unanimous - Game 1 of the 2009 World Series.

After a dominant postseason, Lee took the ball in Game 1 of the World Series against his former Indians teammate CC Sabathia. He turned in a performance that shared some similarities to another legendary Philadelphia sports moment on a big stage.

The Philadelphia 76ers didn't win the 2001 NBA Finals against the Los Angeles Lakers, but the most memorable moment from that NBA Finals may be Allen Iverson's 48-point outburst in Game 1 against Shaquille O'Neal, Kobe Bryant and the eventual champions. The Sixers didn't win another game in that series, but when you think of the 2000-01 NBA Finals, you think of Iverson's performance. Lee's Game 1 performance in the 2009 World Series may be the closest baseball comparison to that.

It's enough to throw a complete game to start off the World Series. To top that off with two unique plays in the field, ones where you don't look the least bit surprised to have made, was the icing on the cake to a remarkable start. 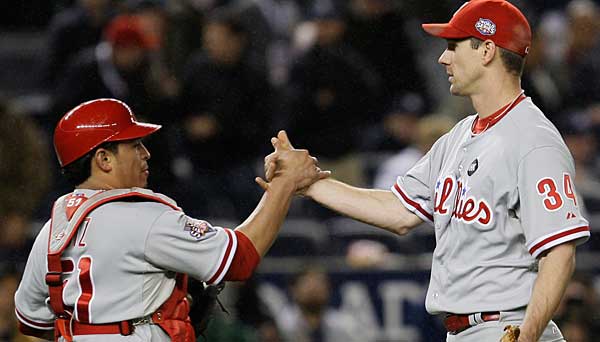