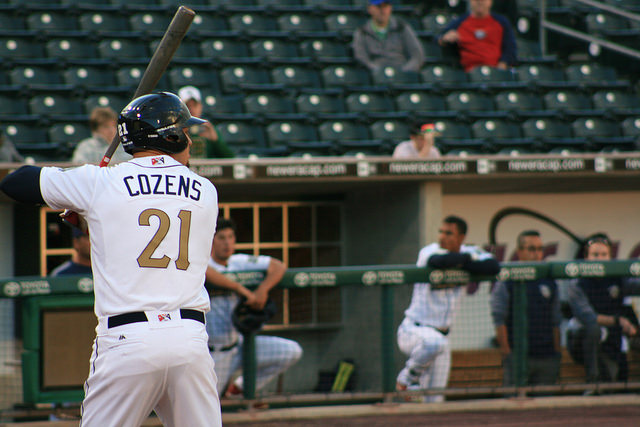 In 2016, Rhys Hoskins and Dylan Cozens were nicknamed "the Bash Brothers," as the two combined to hit 78 home runs for Dusty Wathan's Double-A Reading Fightin Phils. The duo began the 2017 season at Triple-A, with Hoskins finishing the campaign at the major league level, where he drew national attention for his historically dominant start at the plate. With a trip to the disabled list now looming for Hoskins in 2018, it appears that Cozens will be called up to the major league level for the first time.

Cozens, who will turn 24 Thursday, appears to be getting a promotion to the major leagues for his birthday:

Looking like Dylan Cozens could be getting promotion to @Phillies. Packing up bats, getting congratulated. @IronPigs

Dylan Cozens out the door, headed to LA. And.... his 24th birthday is Thursday. Not a bad present from @Phillies, @IronPigs

Earlier this evening, I speculated that Cozens would be called up to replace Hoskins on the 40-man roster. Of course, it was a fairly obvious promotion. Cozens, who homered for the 10th time in 2018 on Wednesday night, was the only healthy outfielder left on the 40-man roster that wasn't already at the major league level. If Roman Quinn had been healthy, he very likely would have been promoted to replace Hoskins, but he's currently on the disabled list after having surgery on his right middle finger.

It's unclear how large of a role Cozens will get in his first stint at the major league level. Even with Hoskins out, the Phillies already have Odubel Herrera, Aaron Altherr and Nick Williams on the major league roster. That trio will very likely make up the starting outfield for a majority of the time that Hoskins is injured. Despite his enormous power potential, Cozens was hitting just .226 with 75 strikeouts at Triple-A, so it's not as though he was kicking down the door.

Given that it appears that Cozens has been informed he'll be promoted, it feels safe to assume that Hoskins will be placed on the 10-day disabled list Thursday. Prior to Wednesday evening's game against the Los Angeles Dodgers, Hoskins told the collective media, which included MLB.com's Todd Zolecki, that a CT scan revealed what he understands to be a small fracture in his jaw.

"We're seeing a specialist tomorrow in Philly," Hoskins said. "I don't know how long [I'll be out], but I think there's going to have to be - surgery or not - time before it's healed."

Hoskins was injured in the ninth inning of Monday night's loss to the Dodgers when he fouled a ball off of his face:

A scary moment on the field as Rhys Hoskins goes down after he fouls a ball off his face. pic.twitter.com/GlEzZ1pLqW

Hoskins was able to record a pinch-hit double in Tuesday night's win over the Dodgers, just hours before he had the aforementioned CT scan.

Regardless of how long Hoskins is out for, J.P. Crawford figures to return prior to him. With Crawford likely to get a majority of the starts at shortstop, that means Cozens could also be competing with Scott Kingery for at-bats in the outfield soon.