Eagles Flyers Phillies Sixers About Us Write For Us
David Griffin: Sixers have "leg up" in LeBron sweepstakes
Carlos Santana: Everything is fine

Kapler on Arrieta comments: Giants series pissed me off too 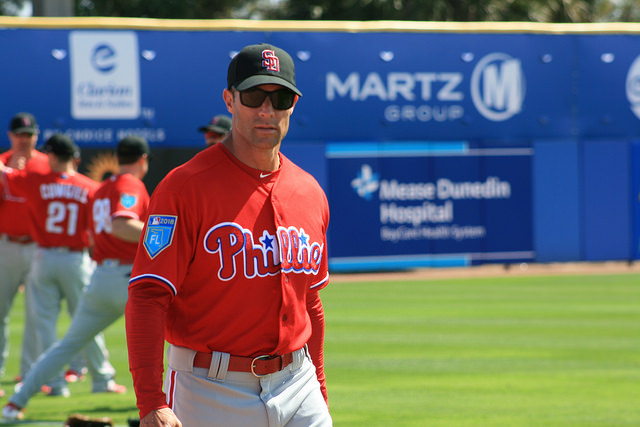 Gabe Kapler was forced to respond to comments made by Jake Arrieta after the Phillies were swept in San Francisco. (Frank Klose/STP)

Philadelphia Phillies manager Gabe Kapler isn't upset. Check that - he's upset that the Phillies only scored one run in a three-game series in which they were swept by the San Francisco Giants. He's not upset at Jake Arrieta, who voiced his frustration with a variety of topics after his bat provided the Phillies lone run of the weekend.

After what he referred to as a "horsesh*t series," Arrieta said the Phillies need an accountability check. The Phillies, who have a league-worst -11 shift runs saved, need to adjust the way they align defensively, in the estimation of Arrieta. He even name-dropped rookie Scott Kingery - who has had mixed results playing shortstop with J.P. Crawford on the disabled list.

Kapler - despite the conclusion from some that Arrieta's accountability statement was a dig at him - told the collective media, which included Jim Salisbury of NBC Sports Philadelphia, that he didn't find Arrieta's quotes inappropriate:

“I have a ton of respect for the leadership characteristics he brings to that clubhouse,” Kapler said. “I know why he responded the way he did and we talked it through like men. And we’ll continue to do that.”

“He’s a really passionate individual,” Kapler said. “He cares a lot about winning and this series pissed him off. It pisses me off, too. It was not our best series.

Last month, Bob Nightengale of USA Today chronicled how Pat Neshek was among a few veterans that met with Kapler after the team's tumultuous start to the 2018 season. Neshek remarked in the story how he thought it was "cool" that Kapler was willing to meet with him to discuss how the team was managed in the first five games of the season. Carlos Santana, who spent the past five seasons playing for future Hall of Fame manager Terry Francona, called Kapler "a guy you want to win for."

Kapler was a former player, but so are many old-school managers. The Phillies were attracted to how recently Kapler had played - he played for the Tampa Bay Rays in 2010 - and that he's just 42 years old. With an older school manager, questioning the way things are done may draw the reaction of questioning a decision that one of your parents makes. With someone that's 42 managing the team, players may view Kapler as an older brother, rather than a father, so to speak. That could be a blessing and a curse.

The first time that Kapler was willing to meet with players, it helped the Phillies to stay afloat through a rough start. Kapler says he's going to go back to that well with Arrieta this week, following a discussion of the comments made to the media today:

In the midst of his postgame comments, Arrieta said the Phillies, who have lost seven of their last 10, are entering a key moment in their season. They're a little over a month away from the All-Star Break. They're just under two months away from the non-waiver trade deadline. At 31-26, the Phillies are just three games back of the National League East leading Atlanta Braves. They are very much in the National League Wild Card hunt, but most teams are in June. As the Phillies travel to Chicago, it does feel as though they are entering a statement series. Forget - at least for a second - about winning the series, they need someone to step up offensively.

Perhaps more importantly, this serves as yet another test for Kapler. Kapler was booed at the home opener. An anonymous player essentially suggested that after the team's 1-4 start, he needed to get out of the way. The rookie manager needs to keep his young team afloat right now. He also needs to continue to build trust in his ability to lead the team. Arrieta was right in saying this is a key moment in the team's season. His comments may have made it one of the most important moments in Kapler's tenure.