Nathanson: Dick Allen and How We Talk About Race 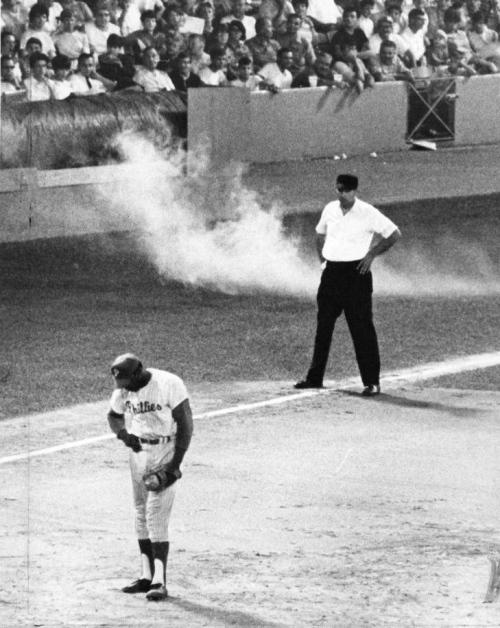 A smoke bomb explodes behind Allen the day after he announced he wanted out of Philadelphia (Source: Mark Carfagno)

I'm very excited to have Mitch Nathanson offer a compelling and thought provoking piece on Dick Allen for our readers. Mitch is a professor at Villanova University of Law and his book "God Almighty Hisself: The Life and Legacy of Dick Allen" was published in 2016. It is the first book-length treatment of the trials and tribulations that Allen went through during his baseball career. Be sure to purchase a copy if you get a chance. - Matt Albertson, STP Historical Contributor

On Friday, Mayor Kenney and Governor Wolf held a press conference in City Hall calling for Dick Allen to be inducted into the Hall of Fame when he’s on the ballot next year.  Which is downright amazing when you think about it – the white mayor of Philadelphia and white governor of Pennsylvania openly campaigning for the induction of Dick Allen – Dick Allen! -- into baseball’s shrine of immortals.  This comes on the heels of the Hall’s “Golden Era” election panel in 2014 that came up just one vote shy of enshrining the controversial slugger.  Which begs the question: how on Earth did all of this happen?  After all, in 1983, the first year Allen was on the ballot, he received only 3.7% of the sportswriters’ votes and nobody campaigned for him, let alone anybody who counted within the Philadelphia Establishment.  He sputtered on like that for the next several years, never receiving more than 18.9% of the vote and he only received that much once.  After he fell off the writers’ ballot he was routinely ignored by the Hall’s veterans committee and nobody made too much of a fuss over that.  When the process for electing veterans changed a few years back, he once again failed to make their ballot and there was nary a word uttered in his defense.

But then a group of dedicated Dick Allen supporters put on a campaign to get him on the Hall’s 2014 ballot.  However even they – the diehards – understood that it was a long shot just to get him on the ballot.  As for election to the Hall itself, well, that was really too much to expect.  Just get him on the ballot, they pleaded.  That would be accomplishment enough.  A few months later the word came down -- they had succeeded.  They rejoiced, as they rightly should have.  This was quite a feat.

There were only six weeks between the announcement of the ballot and the election itself, though, and for much of that time, the talk of the Hall’s 2014 Golden Era ballot was of Jim Kaat, Minnie Minoso and Tony Oliva – holdovers from the Golden Era’s previous ballot and seemingly the odds-on favorites to gain induction this time around.  And, oh yeah, Dick Allen was on the ballot as well.  Remember him? people asked.  Great hitter, they said.  Bad attitude, they recalled.  Bad teammate, they had always heard.  Bad dude, they had come to believe.  With Allen the talk wasn’t so much about the statistics because when it came to Allen it was never about the statistics.  It was always about all that other stuff pretty much everybody had by now taken as gospel:  how he got his managers fired, how he couldn’t get along with anybody, how he drank to excess, how he sullied the game just by taking part in it.  There’s a character clause in the Hall’s guidelines, right-thinking baseball fans and writers have admonished for years, and that eliminated Dick Allen, statistics be damned.

Except that this time it didn’t.  As election day drew near, something strange happened -- the chatter surrounding the Golden Era ballot became less about Kaat, Minoso and Oliva and almost all about Allen.  Turns out he wasn’t, and isn’t, such a bad guy after all, people were starting to say.  In fact, more than a few people argued, you could almost call him courageous – enduring all that he, the first black man in Major League Baseball who refused to “turn the other cheek,” had to endure and achieving all that he achieved in spite of the venom and garbage spewing from the stands and in the media on a daily basis.  Of course Jackie Robinson was a civil rights hero, but perhaps, when examining things more deeply, Allen, in his own way, was one as well.

For here was a man who saw injustice in the form of institutional racism and stood up to it.  True, unlike Robinson he had no agenda, no broader social vision, but when he experienced the brutality of segregated spring training he spoke up against it; when he was compelled to endure the summer of 1963 in segregated Little Rock, Arkansas, he let everyone know what it was like for him; when he saw white superstars such as Mickey Mantle receive cover and coddling from the media and club management while black superstars such as himself remained fodder for public ridicule if they dared step out of line, he made sure nobody assumed that he was okay with that.  As those six weeks drew to a close, even many “right-thinking” baseball people started to realize that the Dick Allen they thought they knew was a creation of their own perception more than anything else.  From a different angle, he was somebody else altogether.

This surprising change of heart as it pertains to Dick Allen speaks to something larger, I believe.  For out of the ugliness of decades upon decades of racial strife and confrontation, perhaps a glimmer of hope has emerged.  At long last, it seems, we’re finally beginning – just beginning -- to engage in a national dialogue about race, about the power of perception, about the need of white America to take a step back for a moment and look at the world from the perspective of black America.  Maybe, this dialogue suggests, white America’s assumptions about the way things work or are supposed to work are just that – assumptions.  Maybe a change in perspective would change the assumptions.  Maybe if we took a moment to look at the world through the eyes of somebody different from us we’d see a different world.  Maybe if we took a moment to look at how the racial double standards of the baseball world of the ‘60s must have looked through Allen’s eyes we’d see something other than a bad dude.  Maybe we’d see someone of the sort of character baseball’s Hall of Fame should celebrate rather than bar.  Which was why, I believe, in only a few short weeks, Dick Allen went from nowhere to the doorstep of baseball immortality.

Still, he fell one vote short.  There’s still work to do.  But all is not lost.  After all, when he comes up for consideration again next year he’ll have, at last, the Philadelphia Establishment firmly in his corner.  Here’s hoping it’s enough to get him that vote.