The Return of the Burgundy Bombers 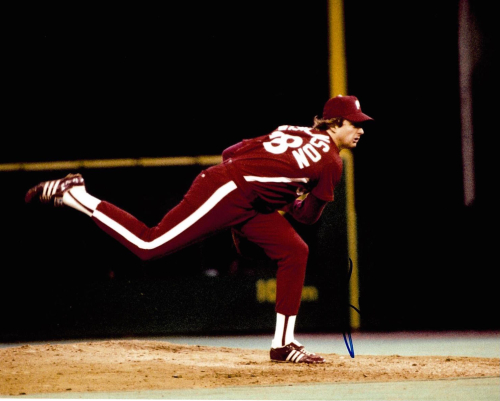 By Matt Albertson, Historical Columnist
The Phillies will wear the infamous "Saturday Night Specials" uniform ensemble this Saturday night against the Atlanta Braves. The Braves will also wear period throwbacks. The all-burgundy uniforms were only worn once 40 years ago on May 19, 1979 when the Phillies lost to the Montreal Expos 10-6. 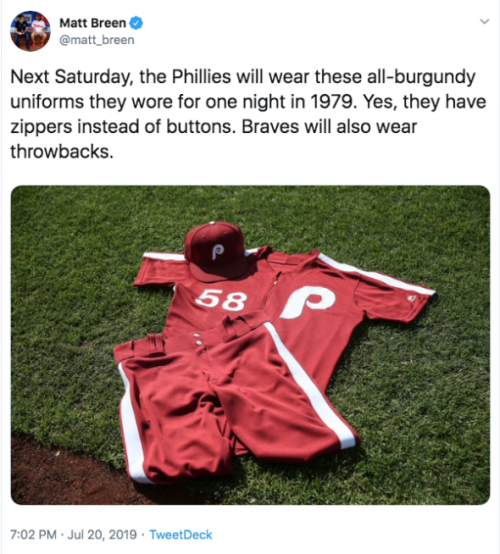 Sports nostalgia continues to boom and the Phillies are capitalizing on it with their continued use of 1970s and 1980s uniform schemes and one offs. Three years ago the team wore 1976 uniforms complete with the opening day pillbox cap. Last year the team announced it would wear the popular powder blue 1980s away uniforms at home for Thursday day games. The Phillies were the second club in major league history to wear throwback uniforms when they donned 1957 retros in 1991. But none of the uniforms since then have been as unusual and unique as the 1979 "Saturday Night Specials".
The original uniforms were the dual brain child of then club president Bill Giles and the 1970s loud uniform craze. The traditional flannel baseball uniform from the 1950s and 1960s gave way to polyester and outrageous color combinations. The team already sported burgundy batting practice jerseys so the novelty of a reverse uniform sans pinstripes (could you imagine if they had pinstripes) seemed worth a shot. But the players hated them immediately. Larry Bowa said they reminded him of uniforms worn for Sunday afternoon softball. Greg Luzinski hated the color because they  looked grape. Larry Christenson, the starting pitcher who made his debut that night in 1979, said that the uniforms were dark and struck the wrong cord with the players. Reliever Tug McGraw said that the entire team hated them because they looked like softball uniforms.
The Phillies had a 4-0 lead over the visiting, sputtering Expos in the top of the 4th when Christensen beaned catcher Gary Carter. Carter made like he was going to charge the mound but trotted to first. Christenson told Inquirer reporter Matt Breen that he thought there was going to be a brawl after the benches cleared. "I thought itw as going to be a brawl in these purple-nurple uniforms. But nothing happened." The altercation fired the Expos up and they went ahead to beat the Phillies 10-6. Larry Bowa blamed the uniforms. After the game, Luzinski told owner Ruly Carpenter that he'd never wear that uniform again and the team threw the uniforms in the trash. Bill Giles told reporters after the game that the uniforms didn't match up to their exceptions; they fit right and they were too dark for TV.
The team hated the uniforms but some fans did not. The Inquirer reported on May 27 that club received numerous calls from fans across the country asking to buy the uniforms. The club agreed and sold the entire ensemble for $200 each, with proceeds benefiting intellectually disabled children in the Delaware Valley. Fans have already tweeted the New Era Clubhouse store asking if the uniforms will be available for purchase this weekend, complete with zipper front. 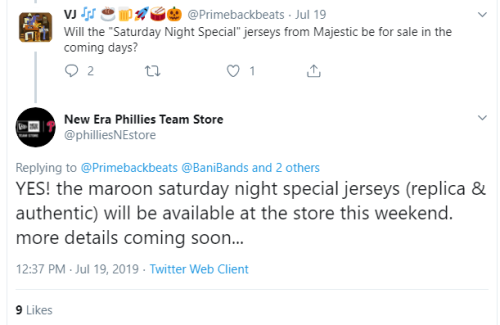 Part of the distaste for the all-burgundy uniforms was because they ere so dark. The lighting industry has vastly improved in the past 40 years and Citizens Bank Park's new LED lighting will literally shine new light on the old color scheme. Saturday night, we will find out whether or not the LED's superior color rendering index will have fans and players alike viewing the uniforms in a different light.