Eagles Flyers Phillies Sixers Union About Us Write For Us
Is Tobias Harris Being Overlooked for All-Star Consideration?
Eagles Coaching Staff Updates

Baseball Has No Love For Truth-Tellers 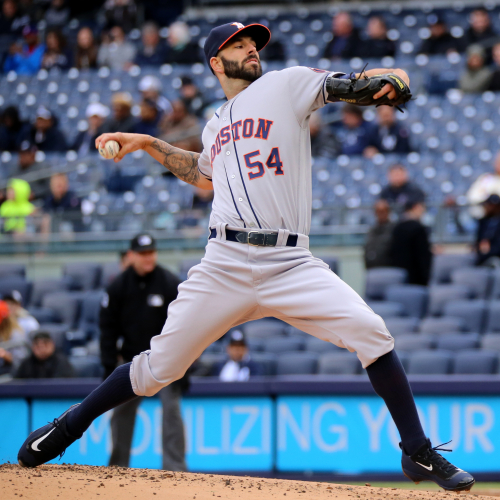 Before her lame sorry, not sorry yesterday afternoon, Jessica Mendoza expressed loud and clear what pretty much everybody in baseball was saying under their breath about Mike Fiers, the former Astro who spilled the beans on his old organization to the Athletic last November: that irrespective of the truth of his allegation, it was the act of speaking out, of exposing the truth, that was the real sin.  For baseball has no love for truth-tellers.  They’re rats, turncoats, lowlifes, for violating the omerta of the clubhouse.  If baseball has a problem -- and yes, of course it does -- it’s not so much this sign-stealing incident, which will percolate through the next few months and then go the way of the steroid crisis.  Instead, it’s the persistent belief that there is something sacred about a Major League clubhouse.  That misguided assumption has been dragging baseball down for decades and shows no sign of letting up.

As she highlighted repeatedly during her tour of the ESPN glue factory yesterday morning, she’d been in clubhouses as a player; she’d been a teammate.  Therefore, she knew that – above anything and everything else -- one teammate should never “rat[] out” another.  No matter what.  No matter that these teammates were making a mockery of the idea of competition, of sportsmanship, of all those things we tell ourselves are important as we plunk down the hundreds of dollars it costs to sit in the stands nowadays to watch what we blindly assume to be a fair fight.  No, it’s more important to protect the guilty.  Why?  Because of the perceived sanctity of the clubhouse.

If this makes no sense to you, congratulations, consider yourself a member of the human race.  If it does, it’s probably because you’re a professional ballplayer and have been acculturated to believe that down is up, that wrong is right.  You also kept your mouth shut as your teammates grew to cartoonish proportions a generation ago.  You might not like Barry Bonds but the real villain in your eyes is Jose Canseco, who not only did what Bonds did but had the temerity to write a book about it.  In other words, you’re screwed up.

Baseball has always made a practice of punishing its truth tellers, even if the truths they’re telling are relatively benign.  In 1960 a relief pitcher named Jim Brosnan published a charming book called The Long Season. It let fans into the cloistered world of the baseball clubhouse just a little.  And Brosnan paid for it with his career.

Brosnan’s book showed fans what the game looked like from the inside—the personal struggles, the doubts, the pettiness of management, and the quirks of his teammates. After reading it fans understood a little more about what it was like to spend an entire game in the bullpen, attend a meeting with a pitching coach, and take a road trip to Chicago. People loved it, with one reviewer calling it “probably the best look ever at baseball as seen through a mature mind.” No matter, other players soon began looking at Brosnan with suspicion, particularly after he released his follow-up, Pennant Race, the next year. At that point even management began to give Brosnan the stink eye. With two books, popularly referred to as “tell-alls” (even though they were far from it), Brosnan had made himself a marked man. He’d better be a top-level performer on the field if he wanted to stay in baseball after that. He wasn’t, and he was out of the game by the end of the ’63 season.

In 1970 Jim Bouton published Ball Four.  It revealed a bit more of the locker room than Brosnan’s books did.  Accordingly, the blowback he received from the game’s insiders was both swifter and harsher.  Bouton wrote about pill-popping teammates, skirt-chasers, and worst of all, a drunken Mickey Mantle.  It was an instant sensation, spending 17 weeks on the New York Times Bestseller list, ultimately selling more than five million copies.  Fans loved it; critics loved it.  Baseball hated it.  Upon its release one critic saw the writing on the wall.  Ball Four, he wrote, was “a wry, understated, honest and memorable piece of Americana, by a good man they will clobber because of it.”  And clobber him they did.

“F*** You, Shakespeare,” Pete Rose yelled at Bouton when he took the mound the day after an excerpt of his book was published in Look Magazine.  As Bouton liked to say later, once the book came out, he was “persona non grata in big league clubhouses, emphasis on the non grata.”  He was out of baseball within two months.

Mike Fiers walks in the imprints of these footsteps.  Of players who were shunned by those on the inside not for telling lies but for telling too much of the truth.  Unlike the ones told by Brosnan and Bouton, the truths Fiers told were hardly benign, as were those told by Canseco.  They impact the game on the field in significant ways.  The legitimacy of the 2017 and ’18 World Series has been shattered because of them.

If history is any guide, while “Astrogate” might be bad for baseball, it promises to be much, much worse for Mike Fiers.  He’ll be 35 years old next season, his best years are probably behind him.  He was a solid pitcher for the A’s in 2019 but not that solid.  Which means that just like those who came before him, in the insular world of baseball, he’s toast.

Nathanson’s biography of Jim Bouton, Bouton: The Life of a Baseball Original, will be published in May.

From the many comments I've seen from current and former players, I believe this may be different. Guys are really po'd about being cheated out of a ring or money. The 1951 Giants scandal was suspected but not proven for decades so it didn't effect as many(except the Dodgers)players and when it did become public, it was stale. I agree with your premise, but this may be different.