Minor League Teams And Players At Risk During Pandemic

It was just a few years ago that MLB decided to invest in BB&T Ballpark at Historic Bowman Field, home of the Williamsport Crosscutters.

Major money was spent to improve seating and fan experiences, but also to increase netting, resurface the field, improve irrigation and other player-oriented changes as the league looked to reach out to it's audience.

Following that initial investment in 2017, the league hosted it's first MLB Little League Classic at the park in conjunction with the Little League World Series the town hosts each year.

For all intents and purposes, the game was a success. The crowd of Little League World Series participants was engaged and the national viewership was high each of the tree seasons since that initial investment.

The success was so high that the state of Pennsylvania saw fit to award the park further grants to continue development of the park in 2018.

But in the winter of 2019, with the current deal between MLB and MiLB set to expire, the MLB made some drastic proposals, including one that would cut 42 teams out of affiliated baseball because of "unsatisfactory" facilities. Williamsport was on that list of teams to be cut.

Of course, 41 other teams also found themselves on the list, like the Erie Seawolves, who had received $12 million from Pennsylvania Governor Tom Wolf in 2018 for ballpark upgrades.

While complaints of facilities not being up to the standard of MLB are understandable, removing large pieces of the communities in a sport where having local teams is what builds fanbases, seems like a poor idea - and one that goes against one of the major reasons behind the league investing in Williamsport to host a Little League Classic.

To no one's surprise, many fans of MiLB were not pleased to hear of the news and the league received immediate backlash upon the plans being leaked.

The spokesmen for MLB seemed to be bent on this happening despite the public outrage from communities that would be affected by the cuts. These teams would need to gather support and prove their impact on the community, especially for teams like Williamsport who may not have the room to build the facilities that MLB is looking for in these minor league stadiums.

In fact, Historic Bowman Field in Williamsport is surrounded. The community's Memorial Park borders to the East with a bike trail and Lycoming Creek to the West. To the South is the stadiums limited parking area and 4th Street - the road that goes straight through town and crosses the Lycoming Creek and Route 15. To the North is a neighborhood that is so close that residents could go to their back or side yard to catch home runs if there's a power hitter in town. 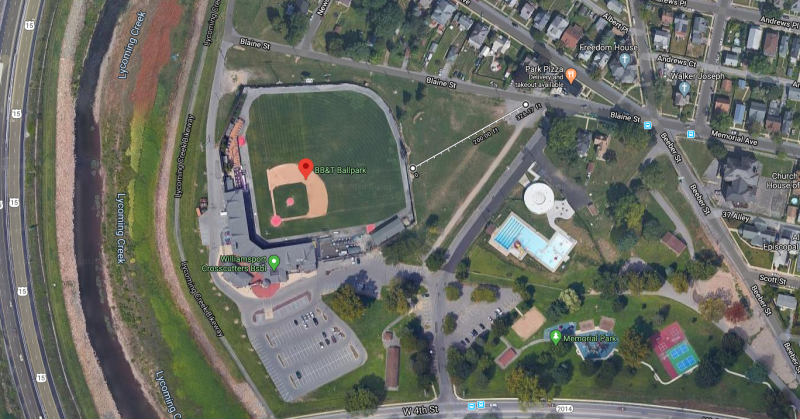 The most space available to the park is available by removing their lone parking lot or adding facilities beyond the right-field wall - an area used for over-flow parking and where the max distance between the wall and a road is around just 325 feet.

Without much room to add facilities and just one season to prove how important to the community and the game the team was, teams like the Crosscutters would need to impress in 2020. They would need to show how good they can be and how they can improve to buy the time needed to develop plans and funding for improved facilities.

Instead, an outbreak of the Coronavirus has forced the MLB to postpone the start of their season. Talk has come out of potential plan to play fan-less games in Arizona and in Florida in order to save the MLB season. But what of the MiLB?

The plans for MLB would likely include expanded rosters that would benefit veterans on minor-league invites and prospects in AAA, but for those who are lower in the system and still developing, there has been no talk of a plan to get them playing.

For places like Williamsport, this could mean a cancellation of the one season they had before MLB and MiLB were looking to strike a new deal.

Not too far away in Binghamton, New York, the Rumble Ponies had an excellent opportunity to impress by hosting the 2020 Eastern League All-Star game. Even if they end up being able to host games in 2020, there is little chance they will get to host the major event as they were planning and if the MLB has their way, Binghamton will never host that event as the team would be cut from organized ball before they ever get the opportunity to host.

While nearly everyone is aware of the impact of this pandemic on businesses, many do not think of the impact on sports. It is understandable to think that way because we all know that Josh Harris has plenty of money to continue to pay his employees and keep the business afloat, for example. But minor league teams are not like that and many, like the Crosscutters, are run similarly to a small business and a seasonal one at that. These minor league teams are in a spot where they could have little to no revenue in 2020 and may have to wait until summer of 2021 to begin serious business again, if the MLB allows them to do so, that is.

And not only will these teams continue to suffer, but so will these minor league players, particularly those lower in systems. In addition to a lack of opportunity for these players to hone their skills, MLB has agreed to pay these players $400 per week through May 31. In comparison, the CARES act has made it possible to collect unemployment for 39 weeks in many states while also making it possible to increase unemployment checks by $600. Often, state laws prevent players who are likely to play again from receiving unemployment so something is better than nothing, but the fact of the matter is that these players will receive less pay than someone who is unemployed during this pandemic.

Some of these players do not have the money to sit on from a large signing bonus, either. Carlos Ruiz would be a good example of this. He was signed for $8,000 by the Phillies and no one knew who he was, so he had no publicity in the minors. Imagine if Carlos Ruiz were paid $400 for nine weeks, his season was cancelled and then the team he would have played at the following season is cut out, leaving him only the option to play in independent leagues and hope someone picked him up and developed him further. This is the possibility that faces many minor league players today.

Not only that, but the league has also proposed that for the upcoming draft, each team makes fewer picks (possibly only 5-10 rounds) with those prospects receiving a max of $10,000 of bonus money and 90% of the money being deferred into the next two years.

The resultant situation is that many prospects will end up signing as an undrafted free agent who would normally have benefited from an increase in salary due to their draft position while those at the top of the class receive a relatively minimal bonus that isn't actually fully given to them until 2022.

Unless MLB reverses course or is willing to negotiate with MiLB on the terms of the new deal, baseball could be facing a situation where they decrease interest in the sport in many communities while also taking away opportunity for players who seemingly come out of nowhere to make it big in the Majors. They are intent on paying the game's future stars pennies as they and their families face a pandemic in order to save a what is a minimal amount to MLB franchises.

In reality, the dilemma that these minor league players face is not so different from that of the Sixers employees who owner Josh Harris said would have to take a pay cut. The only difference is that there is no public outrage to force the league into action. There is no backlash so powerful that owners feel compelled to actually pay their employees.

The outbreak makes a solution difficult to find, especially with franchises, both minor and major league, unlikely to make revenue from ticket sales. However, it is the teams lower in the minor leagues, who do often do not have any TV deal or a TV deal that is much smaller than that of their major league counterparts and who have received no plans to have play this season, that will be most affected.

Now is not the time for the league to make matters worse for their prospects and developmental leagues in any matter, let alone making sweeping changes to cut away jobs for players, franchises and points of community pride as well as the jobs they bring to those in the community.