After the Philadelphia Phillies had dominated at a 90.9 percent clip, they came back to earth because winning 10 of every 11 games isn’t sustainable by any team. And the players don’t expect everything to go their way indefinitely. Unfortunately, some locals believe hot or cold streaks never end, but they always do.

For Phillies fans, the ups and downs between now and Sept. 27 will be a daily occurrence. Seven contests, though, of the final 21 are with a club on the playoff periphery and one in the cellar: the New York Mets (three games) and the Washington Nationals (four), while the Miami Marlins have seven contests to prove they’re for real.

“To succeed, jump as quickly at opportunities as you do at conclusions.” - Benjamin Franklin

While many locals here are probably having some doubts after the 10-1 run ended, our northern neighbors in the Bronx are a perfect example of fandom’s equivalent of mood swings. Well, the New York Yankees opened the season with an 8-1 mark, and their supporters boasted their Bombers are basically unbeatable.

World Series champs, no? But after they only had been triumphant in eight of their next 13 games at 16-5, they went 5-15 in their next 20, and their fans are beside themselves: They won’t make the playoffs, fire the general manager, and fire the skipper. For some reason, I remember similar sentiments elsewhere.

My research includes keeping up with the other 29 organizations also, and ‘20 has multiple injuries every day and not just three or four. No, I’m not alone in noticing a year’s worth in a 60-game schedule not including the COVID-19 cases at the campaign’s beginning. This summer is unlike the usual 162.

In fact, Yankees manager Aaron Boone has received criticism for giving guys too many days off, but he probably is being overly cautious to keep his team on the field. Realistically, the Bronx Bombers have been a MASH unit in 2019 and 2020.

Another area is starters’ infrequency of going even five innings, but some are bullpen pieces forced by necessity to replace rotation arms. Yes, it’s almost like at least half are former openers going three to five frames tops, and another  group are hurlers with abnormally high pitch counts.

Joe Girardi took some heat for pulling Zack Wheeler, for instance, with 83 pitches; but he could be just prudent enough to have six healthy starters: Wheeler could have overextended himself. Well, something Girardi’s doing has the Phillies with the usual injuries in this unconventional season, and he deserves some credit.

Another anomaly is the velocity drop of many starters and relievers, plus Patrick Corbin, the Nationals two-slot hurler, is 2-4 with a 4.34 ERA (four-spot stats). To illustrate, he averaged 92.2 mph with his four-seam fastball in ‘19 but 90.7 mph now, and he is touching 93.1 mph down from 95.3 mph.

By now, pitchers have their velocity. But no spectators cheering or booing is affecting some players, and Nats Adam Eaton has admitted he is one of those stars. Adrenaline? Well, regulars and closers get an adrenaline rush taking the field, but some don’t with empty stadiums, cardboard fans and piped-in crowd noise.

After splitting a four-game series with the Phils, this could be the Mets’ annual last-minute dash for a playoff berth and/or an improved record. Last year, they went 46-25 in their final 81 contests, and the previous campaign they had finished 37-28 without postseason aspirations.

The Metropolitans are starting Jacob deGrom every fifth day, not contest. And although they are two games out, they are behind three other franchises for the second wild card. Therefore, they must win and the other three clubs must lose: They are not as close as they appear.

The Los Angeles Dodgers at 32-12 are the first seed, while the Atlanta Braves at 25-18 are the second seed. So, Atlanta would have three contests at home for the first playoff set if they can finish in the top four seeds. And Cole Hamels could make two pitch-limited outings or more before Sept. 27: one to four innings apiece.

While many like their young moundsmen, the Braves have produced righty Mike Soroka (out for ‘20) and lefty Max Fried on the injured list through Sept. 15 with back spasms. But the others are struggling, and none have made 60 MLB starts. So, they aren’t immune from growing pains: making an impact in or after their third year.

Current forecast on top, previous prediction on the bottom:

For the Fightins, their offense has been two hot stars: Bryce Harper and JT Realmuto at first and recently Rhys Hoskins and Andrew McCutchen. Plus they score with bombs, hits and sacrifice flies, while they mix in stolen bases. Basically, they score early, can tack on runs, and make late-inning comebacks.

On the five-man staff, they have Aaron Nola and Wheeler as a solid one-two punch. And Zach Eflin has progressed with doubled curveball usage while only having one clunker instead of his usual two through six starts. Meantime, Jake Arrieta has had two excellent outings out of his last three.

For the Phillies, the relief corps has improved by not putting the game out of reach. However, eight of the final 21 contests are seven-frame affairs, and the pen with Tommy Hunter and an effective Hector Neris could temporarily limit this shortcoming. And they are the best bullpen pieces going forward.

As for the Braves, their rotation currently is a rookie, an opener, and three hurlers who need their offense and relievers to be victorious. But now they are having their rough patch by recently being 2-4, and they aren’t expecting Fried or an innings-limited Hamels in their next seven games.

Meanwhile, the red pinstripes are 2-3 in their last five contests, but their hitters aren’t under the pressure to literally score heavily in every game. And a recently interviewed Jean Segura strongly expressed that this veteran squad can see the opportunity ahead, and their play backs up his statement.

In the National League West, the San Diego Padres have the fourth seed with a 28-17 mark (second in their division), which means the Phillies are closer to the second seed than the fourth. They are four games behind San Diego and two behind Atlanta with 21 to play.

While the current Nationals’ forecast is eight more defeats to four additional Mets’ losses, the Braves’ prediction is one more victory to two more Fightins’ triumphs. So, they are now two games behind Atlanta instead of three, but these forecasts could be what? Revised again, no? 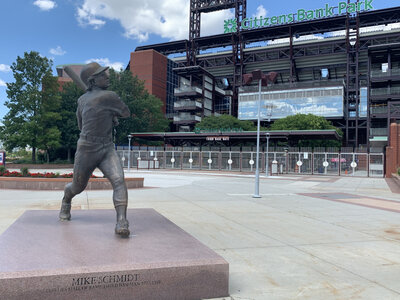