The Phillies made a couple early moves regarding their bullpen.  After the club saw relievers David Robertson, Tommy Hunter, Brandon Workman and Jose Àlvarez declare free agency, two other relievers have been taken off of the Phillies roster as well.  Both Heath Hembree, acquired from the Boston Red Sox over the summer, and Adam Morgan have been outrighted off the Phillies roster.

Both Hembree and Morgan had been eligible for arbitration.  Either player can accept a minor league assignment or choose to be a free agent.  However, the move was likely motivated by very different circumstances for each player.

Hembree was not helpful to the Phillies at all, after the July trade that sent pitcher Nick Pivetta to Boston and Hembree and Workman to Philadelphia.  Arriving with a 5.59 earned run average, Hembree was exponentially worse for the Phillies from the trade forward.  Hembree finished the year with a 9.00 earned run average, with his Phillies ERA being 12.29 in 11 appearances.  The Phillies probably would have had to give Hembree a raise, nonetheless. 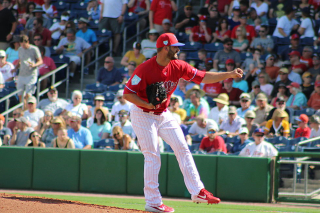 Morgan pitched well for the Phillies, but underwent elbow surgery that makes his 2021 outlook uncertain.  Morgan is said to miss six to  nine months after having the surgery.  The Phillies could sign Morgan to a minor league deal and hope that they reap some later-season benefits from Morgan for their marginal investment now.  The Phillies will need the salary that Morgan would earn in arbitration to work on the bullpen and other parts of the roster.

The Phillies have now six fewer relievers than they did a week ago and will have much work to do in the bullpen.   The Phillies probably will also part ways with David Phelps.  Phelps has a $250,000 buyout or a $4.5 million option in his contract.  Phelps is likely to earn less than $4.5 million in 2021.

The Phillies will have a lot to build in the bullpen this season, and at least the slate is almost clear.