While the Philadelphia Phillies wait for the last full month to re-sign or ink stars for next season’s roster, their main rival for JT Realmuto is also pursuing two other top free agents. And the execs not only know it, but they also expected his market to develop this way. No credit if successful?

For the Phillies faithful who believe Realmuto should either receive what he wants or is worth, the other side would see weakness and an opportunity for more than both. Unfortunately, no easy way exists when the stakes are high, but knowing your competition and the superstar you want to re-up makes it doable.

Sam Fuld is the new general manager after serving as director of integrative baseball performance, an analytical position. Basically, his role was teaching data to hitters from a former player instead of someone who doesn’t know the difficulties involved: This is a recent MLB approach for a slight edge.

Making the final decisions on all of Fuld’s moves will be Dave Dombrowski, president of baseball operations. Fuld’s hire was partly due to being in the dugout, and this current arrangement might continue for about a year. So, fans can relax because both will be working on roster construction.

Franchises have five offseason methods for 2020-21. They are high bidders, bargain hunters, both approaches (the Phillies), early dealmakers and rebuilding organizations signing players they can flip at the trading deadline after adding their veteran presence.

To illustrate, the big-spending New York Mets have signed a setup man and a catcher with generous contracts. And they are competing with the Toronto Blue Jays for George Springer and with the New York Yankees and Blue Jays for DJ LeMahieu. Prediction-wise, the Mets will likely ink Springer.

Among the bargain hunters are the St. Louis Cardinals, Washington Nationals and Miami Marlins. And these clubs could sign three players for the price of two and have a better chance of success even if one acquisition bombs out.

Making one big splash while waiting for a large pool of available talent, the Phils and Jays are in this category. For the Fightins, Realmuto is a must to re-up, and LeMahieu is the best shot Toronto has because the Yankees are holding true to being under the $210 million CBT (competitive-balance threshold).

The Atlanta Braves are a solid example of a team committing early to a high price. For 2021, they inked one-campaign pacts: Drew Smyly for $10 million and Charlie Morton for $15 million. Yes, they both had stints with the red pinstripes.

The rest are restructuring organizations like the Detroit Tigers who will be searching for bargains in January’s second half. Previously, the Phillies used the same approach with Pat Neshek and Jeremy Hellickson during their rebuilding summers.

While the locals are fretting over management’s lack of activity, the execs are patiently watching their strategy unfold. But fans aren’t thinking past April’s roster, while most front offices are making their current plans based also on 2021-22’s free-agent class: their own players and available pickups.

Expecting a competitor to sign Realmuto will trouble some until he re-ups. Fortunately, the Fightins knew in October --if not sooner-- Realmuto had decided to hold out until spring training if necessary, and the competition would go in another direction.

The Blue Jays and Metropolitans are pursuing Springer, but New York (NL) is willing to outbid them to electrify their supporters with a big splash. And even though Toronto has the money, they won’t match the Mets’ proposal because it would leave only $20 million AAV (average annual value) to plug many other holes.

The Jays can add a fifth season to a $20 million AAV offer for LeMahieu and top a four-year $75 million proposal from the Yanks to solidify their infield with a veteran presence. Currently, New York (AL) is at $180.62 million AAV and has only $29 million AAV to spend to be under the CBT. Not your father’s Yankees!

Basically, the Phillies strategy was knowing the Mets and Blue Jays wouldn’t wait until January’s end for Realmuto. And if Toronto inks LeMahieu, the All-Star receiver will still have a decent contract, but it will probably be in the club-friendly range of $20-23 million per 162.

As for Jackie Bradley Jr., the red pinstripes and the Chicago Cubs are the strongest suitors, and Bradley’s forecast is $16 million for two campaigns. Meanwhile, other solid pitchers who aren't costly will also be available.

The Cubbies are cost-cutting, and they didn’t tender an offer to Kyle Schwarber for roughly the same amount Bradley will command. However, they may have to move a piece or two before signing Bradley, which will be a disadvantage. But they could change course due to a wide-open division.

For the Phils’ rivals in the National League East, 2021-22’s free agents are in bold print. And players for franchises like the Cubs will also be available for 2022 and factor in their decision-making. Do they go for it in ‘21, retool or rebuild?

While New York (NL) pursues Springer and a starting pitcher, the Phils are bidding on Bradley and Realmuto. Otherwise, the red pinstripes, Braves, Marlins and Washington Nationals will be competing for mid-tier players available due to the pandemic’s uncertainty.

With good fortune, the Phillies will have Realmuto and Bradley in the lineup and add a starter plus three late-inning men from a healthy pool of pitching talent. They, basically, can sign four decent arms for the cost of three from years recently passed. So, what is 2021’s 10-letter word for getting the job done? Dombrowski! 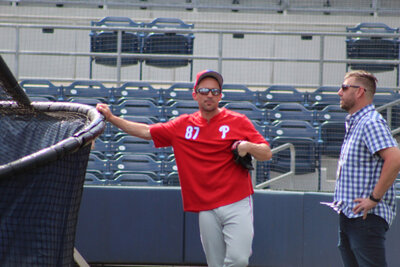 And thanks for reading.

However, I didn't predict anything.

My articles are my opinion of what the Phillies did, are doing, or will do.

My earlier pieces noted the Mets would sign McCann and not wait for JT, and that was long before they did. If there was another team chasing JT, I would write that.

I'm not assuming they will re-sign JT or ink JBJ, but I study all 30 front offices and these are the moves TOR, NYY, CHC and NYM are making, while they bid against the Phils or their competition for two players. Could there be surprises? Yes.

There are many teams waiting until offseason's end for bargains besides rebuilding clubs. I only say what the strategy is. Will it succeed? Maybe.

Did you notice that the picture of Sam Fuld, after your article in Next Up, "January's Smoking Gun for 2021", shows him wearing a RH glove?

No, but I didn't know him as a player.

The Phillies may have solved one problem with Alvarado, but they need to sign J T Realmuto.
Because of the Pandemic and no real money available they should offer a one year contract at $20 Million, with a four year option of $27 Million a year. In addition they should make a trade for Lindor and Carrasco, offering De Los Santos, Rick Matos, Roman Quinn, Vince Velasquez and Odubel Herrera. And then try to sign either Bradley or Springer and they would be set. Perhaps another relief Pitcher such as Hand.

Thanks, again, for reading.

Did you believe no other team could beat that offer to CLV?
You pay all these other players but only guarantee JT $20 million, so why would he accept that if the offer is an insult? Do you believe the Phils would sign 2 of the top 4 free agents with no real money?