Based on the competition shrinking, the Philadelphia Phillies odds to re-sign JT Realmuto are the best they’ve been since 2019. Now, our rival from Queens has committed less for another superstar in ‘21 and thusly completed their big-ticket shopping.

For some Phillies faithful, there are two plans: theirs and none. And if immediacy (the norm) is one part, this isn’t the offseason to draw early conclusions due to guaranteed uncertainty. But some views even have a threatening tone: One fan posted either do something now, or you'll face 10 years in last place. Heartwarming, no?

“Every parting gives a foretaste of death, every reunion a hint of the resurrection.” - Arthur Schopenhauer

Among the usual sentiments, overall expectations haven’t changed from two years ago this month. Yes, it’s like no pandemic and financial shortfalls have occurred for the last 12 months. But things change every season as should your conclusions.

With one month before spring training, MLB teams have spent about $1 billion less compared to last mid-January, and 88 percent of free agents haven’t signed: They are part of a large pool including Didi Gregorius. Ergo, there is no way such a large percentage of available talent is anything close to the norm of winters past.

Front offices have two methods for this offseason: They ink specific players and/or wait for the unsigned group of stars remaining. Translation: Gregorius is probably one of those quality regulars, which is why so many general managers are taking the slower approach --not just the Phillies.

Aside from a few clubs, most are biding their time for a specific player and/or bargains as spring camp nears. Currently, the top four free agents are still available among the unsigned 88 percent because most franchises want bargains like three relievers for $6-12 million.

At the beginning of the offseason, the Atlanta Braves signed two starters. Elsewhere, the Washington Nationals have strengthened their lineup but weakened their defense with left fielder Kyle Schwarber and first baseman Josh Bell.

For the New York Mets, new owner Steve Cohen doesn’t have losses like his contemporaries to influence decision-making, plus he has an additional $20.25 million due to Robinson Cano’s suspension for 2021. So, he was able to capitalize this time, but he’ll have two complications for 2022: Cano and Francisco Lindor.

Although the Mets have picked up Lindor, they don’t want to exceed the $210 million CBT (competitive-balance threshold) and prefer to be $5-10 million under it. However, Lindor will not negotiate after Opening Day, and he wants $300 million minimum. Will he pull a Realmuto?

For eight 2022 Mets, $162 million committed leaves $48 million if the $210 million CBT remains after the current CBA (collective bargaining agreement) expires at 2021’s end. But $48 million AAV (average annual value) is for the other 32 players on their 40-man roster.

While the Metropolitans went in another direction, the Toronto Blue Jays remain a possible landing spot for Realmuto. However, the Blue Jays have young catchers other franchises covet, and Realmuto would block their advancement with a five-campaign deal.

While the Jays have seemingly contacted every free agent, they will probably ink one of the top-tier stars and fill out their roster with end-of-January bargains. Presently, George Springer wants $150 million for five seasons, but DJ LeMahieu is Toronto’s preference.

The New York Yankees are reportedly *$25 million short of LeMahieu’s asking price of *$110 million for five summers. But although the cost is realistic for Toronto, New York (AL) may get a last look to match any proposal. * The Yankees and LeMahieu have a deal in place for $90 million for six years.

Even though many big league supporters believe no immediate action equals no plan, all 30 organizations have a strategy: It’s just not theirs. And the red pinstripes are no exception despite some locals who vocalize otherwise.

For the Phils, their AAV payroll is almost at $161 million and leaves $45 million if the front office drops to $206 million AAV for ‘21. So, a possible strategy is to keep 2020’s offense and add bargain arms including Anibal Sanchez. Plus he is reportedly the Phils’ target along with an available reliever before mid-February.

As expected, Realmuto is atop their re-upping list for five years at $23 million AAV or less and Gregorius for two summers at $12 million AAV tops: my guesses. Therefore, $30-35 million AAV is probably the range, but $35 million AAV would put the tally at $196 million AAV with $10 million for hurlers.

While fans haven’t bemoaned the lack of a big acquisition, re-signing Realmuto for over $20 million per 162 for five years definitely qualifies. And pursuing Gregorius, a left-side bat with power, four-slot starter Sanchez, and a bullpen arm reveals what? Their fingerprints! 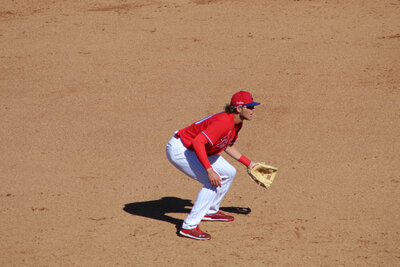