Eagles Flyers Phillies Sixers Union About Us Write For Us
Flyers Rebound with Win Over Rangers
Flyers 5: Takeaways from Wednesday’s Flyers-Rangers Game

In November, the Philadelphia Phillies faithful believed the franchise was a self-driving car going around in circles with little hope of addressing their needs. Furthermore, managing partner John Middleton claimed losses of up to $150 million and projected a lower payroll. Sacrebleu!

Some Phillies fans have no difficulty spending above the CBT (competitive-balance threshold), as if the pandemic and global financial problems are cinematic. Previously, their shopping list included two mid-rotation arms, an entirely new relief corps with a stud closer, and re-signing JT Realmuto and Didi Gregorius before December.

“That most delicious of all privileges -- spending other people's money.” - John Randolph of Roanoke

Behind the virtual front-office door, the higher-ups realized Realmuto and Gregorius were not going to quickly sign anywhere --especially the All-Star catcher. So, their strategy was to re-sign them and pick from a large pool of pitching bargains even before the hiring of Dave Dombrowski, president of baseball operations.

In fact, president Andy MacPhail even said they would be late free-agent buyers on October 31, but it was one sentence within an entire interview. And either writers or fans didn’t hear or read MacPhail’s remarks at the time --like me-- or their views muted the comment if they noticed it.

Even though the Fightins have committed $201.7 million AAV (average annual value), they will also be responsible for roughly another $6 million when Tony Watson and Brandon Kintzler make the Opening Day 26. But those two hurlers will increase the monetary total to only cover 21 roster slots.

For an active 26, they will add five players for $2.8 million like those below or others of similar status at approximately the MLB minimum salary. Translation: The wages of Alec Bohm, Spencer Howard, Adam Haseley, Roman Quinn and a reliever like Ranger Suarez are not in the projected amount of $207.7 million AAV.

On one-year deals, Dombrowski inked southpaw Matt Moore for $3 million and righty Chase Anderson for $4 million. Yes, the Phils spent $7 million for two rotation pieces, which is less than many organizations committed to one starter. And both are solid acquisitions for the bottom rungs of a regular five-man staff.

Last summer, Moore worked 78 innings, and the major league high was 84 frames by Lance Lynn. And only 17 pitchers including Aaron Nola and Zack Wheeler had handled at least 70 innings, so Moore’s 2020 workload in Japan and left-handedness caught Dombrowski’s interest with a full 162 ahead.

For $4 million, Anderson is a four-slot hurler, even though he struggled during last season’s upheaval. Also, he’s made from 25 to 30 starts apiece in his five full campaigns (2015 through 2019) after his rookie summer with a mid-May call-up: a decent pickup!

Teams, comparison-wise, overpaid for specific moundsmen and/or waited to sign bottom-of-the-rotation arms for bargain prices. Therefore, Dombrowski followed the Phillies blueprint to firstly re-sign Realmuto and Gregorius and then ink Moore and Anderson for $7 million total.

Alternatives to the Phillies Acquisitions:

After the Blake Snell trade, the Tampa Bay Rays had 41 players for a 40-man roster. And Dombrowski pounced to engineer a three-club swap and net lefty Jose Alvarado. Basically, the modest expenditure of $1 million provides the red pinstripes with three seasons of control due to arbitration eligibility.

Plugging the biggest hole in the pen, Dombrowski inked Archie Bradley to provide manager Joe Girardi with an option for the ninth inning or any critical frame after the sixth. And a national publication even wrote the Fightins had scored a bargain at $6 million for one year.

To allow Girardi some breathing room with Bradley and Hector Neris, the Phillies added a mid-leverage closer with Kintzler and a left-handed setup man in Watson. Both are on minor league pacts and will receive $3 million if they make the squad, plus both are likely to be solid contributors.

While the red pinstripes guaranteed $13 million for Bradley, Watson, Kintzler and Alvarado, other franchises signed the below alternatives. Yes, some got bargains and others paid top dollar for a premium closer.

During a 2019 interview, I saw it on Middleton’s and MacPhail’s faces. The dread! Like cornered prey in a canyon with no alternative exit, the execs covered possible expenditures with the media. Yes, they carefully selected their words, but their facial expressions indicated something missing in their financial answer.

Before 2019’s stretch drive, management disappointed the faithful by not spending heavily, but the team was barely playing .500 ball, losing ground, and not making a run. They were more than one piece away, so the Phils decided this wasn't their time. Of course, the locals --some had given up in June-- were angry as usual.

Basically, you consider yourself to be a fan, but you’re a paying customer to them even at home with cable television. And only Charlie Manuel, Pat Gillick, Dallas Green and Paul Owens have a place in your heart and one obscure thing in common. Rarely, do you give a skipper or a GM a pass, no?

The MLB has the Luxury Tax to pay a financial penalty for spending above a certain negotiated amount (CBT) in the CBA (collective bargaining agreement) for parity. To reset the penalty, though, an organization must be under the CBT for a full year, and $210 million AAV is 2021’s first threshold.

And each dollar over the second and third limits has an additional percentage. Therefore, if a club spends $240 million AAV, the penalty would be 20 percent of $30 million ($6 million) plus 32 percent of $10 million ($3.2 million) for a $9.2 million tax going to low-budget teams including the Rays.

The Luxury Tax (based on consecutive years):

In consecutive year three and each straight season following, spending $30 million AAV above the CBT is $15 million for the first limit and $6.2 million for the second threshold: $21.2 million, not $9.2 million like the first summer. And the additional loss of ten draft-pick spaces for exceeding the third limit in any 162.

For Chicago Cubs fans, one World Series title wasn’t enough, they needed a closer, and Craig Kimbrel was still available after 2019’s MLB draft: They signed him for three campaigns at $43 million. But he was a bust, and the end results were CBT taxes, a new manager, Theo Epstein leaving before his pact’s end, and unhappy fans.

Despite winning the 2018 Fall Classic, the Boston Red Sox had paid nearly a $12 million penalty, and re-signing Kimbrel would have cost them an additional 75 percent tax on $43 million: $75.25 million total. Now, Red Sox Nation claims deception: Boston fired Dombrowski after not making the 2019 playoffs.

Due to no 2020 Luxury Tax collection, the New York Yankees won’t pay $29.25 million despite inking Gerrit Cole for $324 million ($36 million AAV). Currently, Hal Steinbrenner doesn’t want to pay clubs to beat them, and I believe Tampa Bay is the unspoken part. But Yanks fans know they’ve paid over $500 million in penalties.

Except for the supporters of the Yankees and small-market franchises, the Phillies and other organizations understand spending to the limit for April means expectations to exceed the CBT in July even for a remote chance. But Middleton is willing to spend up to $230 million if they have a realistic opportunity, not a long shot.

Like the Yanks now, the Phils would slide under the CBT to reset the penalty after spending $230 million AAV, and fans would be upset even if they win the 2021 World Series. But though the MLB can establish new penalties due to many clubs ignoring the CBT, what could the locals demand for 2022? Spend $250 million! 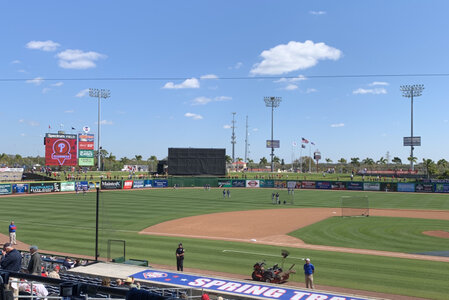