Eagles Flyers Phillies Sixers Union About Us Write For Us
Flyers 5: Takeaways from Tuesday’s Flyers-Sabres Game
Two Secondary Effects of the Phillies Offseason That Are Being Severely Overlooked

While the Philadelphia Phillies faithful celebrate the home run videos of Bryce Harper and others, the difference-making is on the mound. And assuming who the closer-to-be is or isn’t may be neither Archie Bradley nor Hector Neris, plus the battle for the final bullpen seat might be the toughest decision.

For the Phillies, one appearance could be a five-way tiebreaker and a ticket to Allentown for second place. Plus an injury-free competition may come down to the final cuts. Furthermore, the victor-to-be must produce to keep his middle-relief role. And he knows it!

“I try to do the right thing at the right time. They may just be little things, but usually they make the difference between winning and losing.” - Kareem Abdul-Jabbar

Barring the unknown, the Fightins are at or above the $210 million CBT (competitive-balance threshold) because of roster-making contracts, but the players by seriously contending will force the execs to increase payroll for the trading deadline. Therefore, the relief corps is present, but their roles are fluid.

Dave Dombrowski, president of baseball operations, has assembled proven veterans and some fireballers to compete for up to eight jobs. Though, further investigation reveals the pen is even more striking up close.

Manager Joe Girardi now has the pieces he needs for the final three innings with the acquisitions of Bradley, Brandon Kintzler and Jose Alvarado to complement Neris. Preferring specific roles, however, Girardi has four potential closers, or he could deploy his best options during critical late-game frames.

With five starters, Tony Watson, David Hale and Vince Velasquez, Girardi could have five other relievers: Bradley, Neris, Kinzler and Alavardo are four. So, Connor Brogdon, Jojo Romero, Sam Coonrod, Hector Rondon and Ranger Suarez will battle for one spot. But Romero and Suarez being portsiders may have an edge.

Making adjustments is a two-way street for pitchers and hitters. To illustrate, Brogdon’s 16.88 August ERA for three outings dropped to a 0.00 September ERA for six performances, but he did allow an inherited runner to score. And keep in mind, his four-seam fastball averages 95.7 mph with a high of 98.7 mph.

The league may have adjusted to left-hander Romero after he had recorded a 3.00 ERA for his first seven chances. Unfortunately, he finished his final five opportunities with a 13.50 ERA or headed in the other direction of Brogdon’s 2020. But he has a four-seam heater: 95.8-mph average with a 98-mph high.

If Rondon makes the red pinstripes, he will earn $1.5 million and increase the CBT over the $210 million AAV (average annual value). However, this could work against him if no injuries open up a back-end role in the bullpen. Plus he struggled in ‘20, but was it just the disruptions?

Since the Phillies reported Suarez’s visa issues on Feb. 19, no new information is available on his arrival in Clearwater. Where is he? Remember, he only had two outings last summer: Both were disastrous. Hopefully, he’ll join the squad and return to 2019’s form: a 3.14 ERA for 37 performances.

While those five moundsmen vie for one spot, many writers have Bradley challenging Neris for the ninth-inning role, but two other relievers have a decent shot as well: Kintzler and Alvarado. And Girardi could employ Neris and Bradley in crucial frames before the ninth.

Developing a slider as a third pitch could make Neris the go-to weapon for the skipper. But does the right-hander have enough time to twirl a decent one? For now, though, he already has a 94.3-mph four-seam fastball and an extremely late-breaking splitter.

Fanwise, Bradley is already the closer, and he has experience retiring the final hitters. But he also has handled late-inning situations, and contests decided in the seventh and eighth frames against the opponent’s best hitters may require Bradley to hold a lead.

Even though Kintzler could be the seventh-inning reliever, he could also close out less-stressful ninth frames. Last year, Girardi went to Neris for the toughest outs and Brandon Workman for the ninth. Translation: He can use the pen like he did for the New York Yankees or 2020.

With Watson as a lefty setup man, Alvarado could give the manager a closer who can face the heart of the opponent’s batting order. And he could allow Girardi to rely on Bradley and Neris for the most challenging outs before the ninth, so the skipper could gradually move Alvarado into frame nine.

While Rondon can beat out Brogdon, Romero, Coonrod and Suarez for the last slot in the relief corps, who might claim the closer’s role? Yes, it could be Bradley, Neris or Kintzler in April. But Alvarado has the look of a ninth-inning weapon, so what will he be if it’s his spot in May or June? The odd man in! 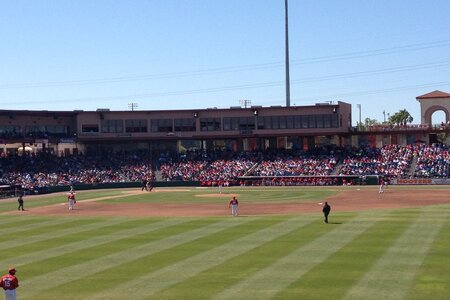 For the starting seven, the averages are meaningless. Some guys hit but struggle in April. Others have a so-so spring but crush the ball in April.

Center field is where the production matters to make the team and receive playing time. So, KIngery, Herrera, Quinn, and Moniak are where the stats matter. Moniak probably will open the season at the alternate site and Triple-A in May. Haseley is on the injured list but will push for playing time in April when he's ready.