For the Philadelphia Phillies faithful, ‘22 may be more than just another season, and it depends on two acquisitions, two in-house comebacks, and relatively good health. And if these four players produce up to their potential, the Atlanta Braves and New York Mets may have stronger competition.

On the Phillies and in the MLB, stars in the first summer of a multi-year contract usually excel because impressing their new employer eases their transition. Moreover, players with a make-or-break campaign also have a higher degree of concentration because their future is riding on the results of a particular 162.

“Just give me 25 guys on the last year of their contracts; I'll win a pennant every year.” – Sparky Anderson

The Fightins’ offseason will determine their fate. Perhaps, they’ll provide an ending that’s more pleasing after 2021’s experience because they’ll have a normal winter preparation and an improved roster. Plus unfinished business!

With Odubel Herrera’s departure from the Phils, Dave Dombrowski, POB (president of baseball operations), will have an additional $11.5 million for expenditures. No, the outfielder won’t be returning because he’s an arb-eligible player with less than six years of major league service time: He can’t re-up here for less.

The red pinstripes could have a fifth difference-maker if POB Dombrowski signs a right-handed power threat to replace Andrew McCutchen. However, it depends on other free-agent opportunities, and most top-tier stars will wait until after a new CBA (collective bargaining agreement) takes effect.

Because the CBA could still be in negotiations into January, spending for sought-after stars may continue into March. So, left field may begin as a competition with an inexpensive free agent or young outfielders Matt Vierling, Luke Williams, Mickey Moniak and former prospects still in the organization.

The Phillies will start with $180.9 million AAV (average annual value) and have $31.1 million AAV if the new CBA has a $212 million CBT (competitive-balance threshold). And anticipating $5 million AAV over that limit would bring the spending ceiling to $36.1 million AAV.

In a regular offseason, the Fightins would have an order of need, but this winter may be bottom to top until there’s a new CBA. And the POB could have $28 million AAV for a closer and a leadoff-batting center fielder: Raisel Iglesias, almost 32, and Starling Marte, 33, respectively.

Granted, the competition for Iglesias and Marte may increase the price, but freeing up money gives the Phillies more flexibility to address their biggest needs. And although defense might be left field’s outcome, an eight-hole bat providing some offense could be their only option after filling two important roles.

Converting 87.2 percent of his save chances, Iglesias is just shy of a 90 percent elite-level closer: Aroldis Chapman, Josh Hader and Liam Hendriks. But while they earn $16-17 million per 162 (Hader will as a free agent), Iglesias would run $14 million a season. No second thoughts!

He’s younger than Mark Melancon and Kenley Jansen: The former costs less and the latter is more expensive. Moreover, Melancon’s resurgence and Jansen’s newfound unpredictability could have limits. My two cents: Iglesias is one of the top firemen, and a multi-year deal is worth it.

The red pinstripes need a leadoff man and a solid glove in center field. Well, Marte’s stats reveal he gets on base and turns a single into a double. And he’s 33 percent above average offensively overall (wRC+). Unfortunately, he’s the only top center fielder in this free-agent class.

Even though Marte’s asking price was $50 million for 3-4 campaigns via a Miami Marlins’ extension, the lack of competition could up that figure to $70 million for 4-5 summers. But the alternative is to trade for injury-prone Byron Buxton, more-leather-than-bat Kevin Kiermaier at $12 million or others for a prospect haul.

Barring a different CBT, $36.1 million AAV or $217 million AAV would be the ceiling without a can’t-refuse possibility. Ergo, $8.7 million AAV would remain for the hot corner and shortstop. Alternative: Work with Alec Bohm and Didi Gregorius. Basically, the cost of a top free agent will be $20-25 million AAV for either spot.

If Gregorius wants to continue making $14 million a 162, he has to do it in 2022. Otherwise, this will be his last big payday. Was his problem his age or his elbow? Either way, Freddy Galvis at $2 million could be a three-month stopgap for Bryson Stott, but there’s no need to promote the youngster if he isn’t ready.

Phillies conclusion: His hitting affects his fielding. So, new hitting coach Kevin Long is working with him in Clearwater because fixing the bat will improve his confidence: thusly, his glovework. And the correlation appears to be on point.

To sum up, subtracting McCutchen’s $15 million and Herrera’s $11.5 million equals $26.5 million. And $28 million AAV is the cost of Iglesias and Marte or $1.5 million more. For those who are wondering, why are McCutchen and Herrera now free agents? It’s a financial wrinkle! 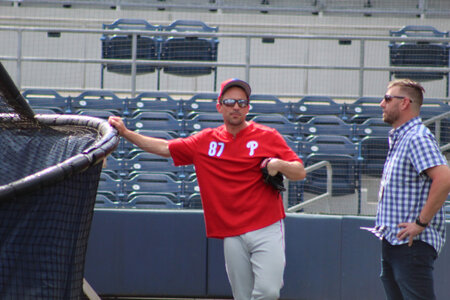