Philadelphia Phillies interim skipper Rob Thomson, aka Topper, has a new approach to managing a pen’s backend. At least, I’ve never heard anyone express it like this. Fortunately, I listened closely to unearth this thought-provoking gem.

Former Phillies manager Gene Mauch either invented the double switch or was the first to rely heavily on it. Like closing, it became a strategic weapon for most skippers. But, now, the final three innings of winnable games have gone from a three-frame save to specific innings and situations.

“In order to grow we must be open to new ideas…new ways of doing things… new ways of thinking.” – George Raveling

In the seven Atlanta Braves’ contests, the Fightins went 3-4 with another three games ahead at July’s end: Aug. 2 is 2022’s trading deadline. The second situation: The relief corps will back up home starts by southpaws Christopher Sanchez and Bailey Falter against the Washington Nationals. Four pen frames each!

During the last three innings, Corey Knebel will face the top of the order with a three-run lead or less, regardless of the frame: seventh, eighth or ninth. Yes, the closer depends on the opponent’s lineup to determine which reliever has the assigned role, barring a right or-left-heavy threat.

Seranthony Dominguez will handle the meat of the order and won’t close against the bottom three bats. Translation: He will face the toughest three outs after the sixth inning, so don’t expect the traditional ninth. But if the red pinstripes don’t retire the lineup’s heart with a lead, there won’t be a ninth-frame save.

Keep in mind, Dominguez missed two seasons, barring one inning in 2021’s final contest due to COVID-19 delaying his Tommy John surgery. And Topper probably has limits on his consecutive workload from the higher-ups because of his value now and in 2023. Is it worth one win?

The bottom of the order is for Brad Hand, unless they need him to face two left-side bats in another late frame. For those wondering, though, about Andrew Bellatti’s usage, he is filling in for Connor Brogdon against a stronger right-heavy lineup bottom. But these three will pitch in a tougher inning to replace an unavailable arm.

Due to improved control since returning from Triple-A, Jose Alvarado is backing up an unavailable Hand, like Bellatti for Brogdon. And, currently, these are six of eight relievers with two others for low-leverage outs. But if lefties JoJo Romero and Ryan Sherriff fall short, the Phillies will use two right-handers.

Sam Coonrod, Romero and Sherriff are now finishing their rehab assignments, but whom do they replace besides Nick Nelson? For now, Nelson’s occupying Brogdon’s slot, while he is out due to COVID-19 protocols. Additionally, Jeurys Familia is a $6 million mop-up man, who is 50 percent effective.

Coonrod and Mark Appel could be the other two bullpen pieces until the trading deadline of Aug. 2: July 31 is a Sunday, and organizations will have an entire Monday to properly finalize their moves. But if Appel earns medium-leverage spots, he could affect the front-office decisions.

The pen may need an upgrade of one or two backend pieces if making the playoffs depends on it. Basically, the Fightins have two MiLB catchers, and one could lead to a deal for a top available hurler. Plus the club is at $236.4 million AAV (average annual value) with $250 million AAV being the second penalty threshold.

While Coonrod, Romero and Sherriff could return if there’s a slot for them, Bryce Harper and Jean Segura won’t be back until August. Under their current timetable, though, Harper will return around Aug. 7-21 and Aug. 10-24 for Segura. So, Dave Dombrowski, president of baseball operations, may pursue a center fielder.

With $14.6 million AAV, the red pinstripes shouldn’t have difficulty picking up two relievers and a center fielder. But the quality of the return could hinge on backstops Logan O’Hoppe at Double-A or Rafael Marchan at Triple-A being in the swap. Realistically, Marchan is MLB ready but O’Hoppe is the bigger prize.

Detroit Tigers closer Gregory Soto, 27.5, has 16 saves out of 18 chances with a 2.48 ERA, and he’ll be arbitration eligible for ‘23: three years’ control and probably unavailable. Presently, he’s earning $722 thousand, and their receiver Tucker Barnhardt will be a free agent after ‘22. But the stud would cost at least O'Hoppe.

As a two-month rental, David Robertson of the Chicago Cubs is another option for $1.2 million (a third of his contract). Currently, Robertson, 37,  has 11 saves out of 15 opportunities (73.3 percent) and a 1.95 ERA; but the red pinstripes could keep their top prospects out of a two-player package.

In October, Dombrowski mentioned Johan Rojas, 22 on Aug. 14, and he was the only MiLB player named in the presser. Well, he is now at Double-A with a flying start: the future center fielder. And it translates to 2023’s first half at Triple-A with a stopgap until July if he doesn’t hit any speed bumps.

While many fans wouldn’t spend millions on a long shot in their own –if they had one– business, they have no qualms about the Phillies doing it every July. But exceeding the CBT (competitive-balance threshold) in consecutive seasons is only a two-shot gamble before the penalty rises to 50 percent for a third summer.

The faithful expect it every stretch drive, but money and performance –performance– are the victorious combination. Ergo, the players must play around .600 ball to earn management’s spending. Since June 1, how have the Fightins done with Harper missing 11 games? They’re 21-9 (.700). 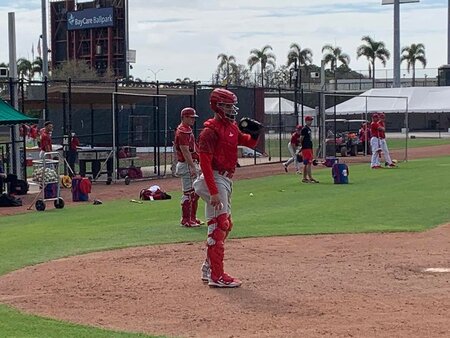