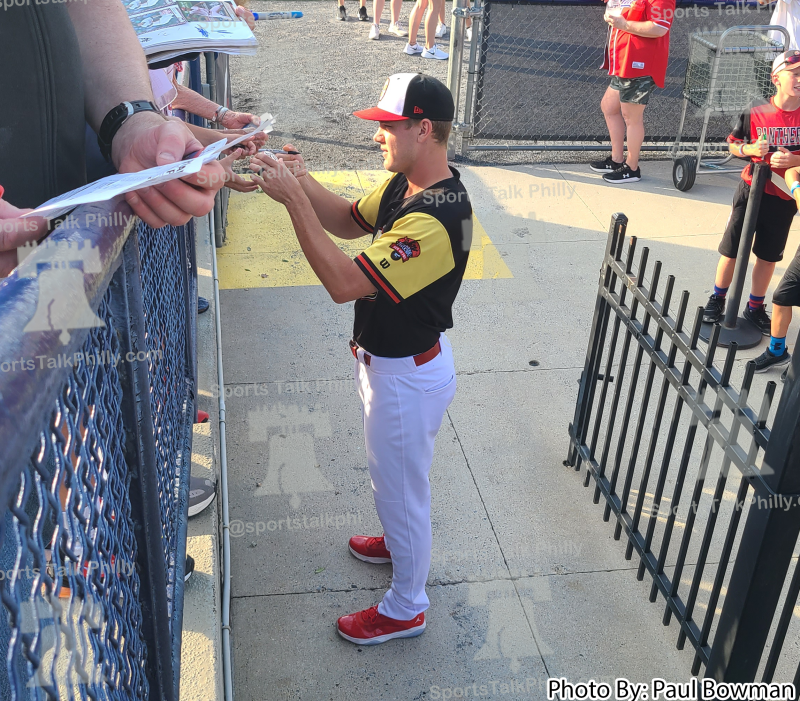 James McArthur signing autographs for fans in Reading on July 1, 2022 – two days after the Phillies transferred him to the 60-day IL.

Phillies fans are likely already aware of the poor situation the team is in Philadelphia with regards to their injuries.

Connor Brogdon, Sam Coonrod, Zach Eflin, JoJo Romero, Ryan Sherriff, Ranger Suárez, Johan Camargo, Nick Maton, Jean Segura, and, of course, Bryce Harper are names that many fans will have heard and have some awareness of their unavailability to the team.

While players like Matt Vierling, Bryson Stott, Nick Nelson, Mark Appel, José Alvarado, Yairo Muñoz and, most recently, Darick Hall have been able to step up at times and help to keep the Phillies competitive, the situation beyond is getting dire.

Damon Jones, at Lehigh Valley, is on the Phillies 40-man but is on the 60-day injured list as is Reading’s James McArthur.

The Phillies, for their part, have been 9-4 since losing Harper, a time when they've been missing more players than any other point in the season.

At Lehigh Valley, where the Phillies have already called upon what seems like half the roster to assist in these times, the aforementioned Damon Jones is on 60-day IL. Though only on the 7-day IL, pitcher Cam Bedrosian has been out since April 5, while fellow teammates OF Justin Williams and P Scott Moss are in similar situations and have been out since April 11 and April 18, respectively. Pitcher Hans Crouse, acquired in the Spencer Howard trade along with Kyle Gibson last year, has been on the 7-day injured list since May 12.

IronPigs pitcher Aaron Barrett is also listed on the developmental list after announcing his plans to retire following July 4th.

In Reading, Trevor Bettencourt has been on the injured list since 2019, a season where he pitched just 2.2 innings. Joining him on the 60-day injured list this season at AA have been pitchers Blake Brown, Joel Cesar, James McArthur (40-man), Josh Hendrickson and Taylor Lehman while David Parkinson has spent the entire season parked on the restricted list.

Among the hitters there, Chris Cornelius has also been on the restricted list all season while Matt Kroon hit the 60-day injured list and Josh Stephen was placed on the full-season injured list. Meanwhile Madison Stokes hasn’t played since May 3.

Jersey Shore’s Luis Garcia missed over two month earlier this season and was just reactivated on July 6. Pitcher Brett Schulze has been out since April 8.

Full-season injured list placements have been made for pitchers Chase Antle and Jhordany Mezquita while fellow pitchers Christian McGowan, Tom Sutera, Spencer Van Scoyoc and Keylan Killgore are on the 60-day IL for the BlueClaws.

In case you weren’t counting, that’s 23 pitchers and six hitters, NOT including anyone who is already on the Phillies 40-man roster.

Only Colby Fitch has found a new home in MiLB to this point, signing to play for the Angels AAA squad.

What’s the point of writing all this, you may ask. One reason is to indicate just how dire the Phillies depth is at this point and how important it is that they begin to get some guys back to give them options. The other is to indicate just how amazing the Phillies have played having to call upon guys acquired in minor trades and what is widely considered a weak or bottom-heavy minor league farm system that is missing almost an entire roster worth of prospects to their own injuries.

The hope is certainly that the team can get more players back healthy (Nick Maton, Connor Brogdon, and Johan Camargo are among those who are rehabbing already) than they may lose to further injuries, but perhaps it’s also time to consider changing how the Phillies farm system has been though of for many years.

Amazingly, the minor league teams themselves have been able to perform, to some degree, with their own players missing AND their prospects all getting moved up as a result of injuries at the highest level. Lehigh Valley has maintained a winning record of 44-38 (as of July 8th). Although Reading has an overall losing record (35-44), they have started the second half of their season off going 6-4, handing the far and away best team in the league (Somerset/Yankees) their first series loss of the entire season. Clearwater has managed to hold at .500 on the year and is in second place in the West Division overall. Only Jersey Shore (27-51), has had a consistently disappointing season.

MLB ranked the Phillies farm system as the 26th worst out of 30 this preseason, but it would really be a challenge to find another organization that would be able to maintain the success the Phillies have had needing to rely on their farm system to replace as many people over the course of this season as Philadelphia has had to.

While the perception of a weaker farm system may hinder the Phillies ability to make some impact trades, the young players in this system are trying to prove a point that perhaps such a trade really isn’t needed.

If the Phillies believe that guys like Eflin, Coonrod, Romero, Segura and Harper will be back this season and players like Maton, Camargo, Vierling, Falter and Sanchez can keep the team competitive until that time, why send away prospects or current contributors for guys that may not be needed in a month or two? If that’s the case, the needs of the team may just come down to a few spots where they look to upgrade some of their lowest performers (back-end starter, closer, etc.) and that’s only if they don’t believe in players like Gibson or Dominguez being able to hold down those spots.

The bigger statement they are making, however, is that the Phillies farm system is not as bad as fans perceive it to be. Instead, perhaps it’s time that the perception many fans hold of the system and the minor trades the team makes changes to be in a more positive light; the Phillies Day Care, as they’ve come to be known, has more than proven that they are deserving of it.