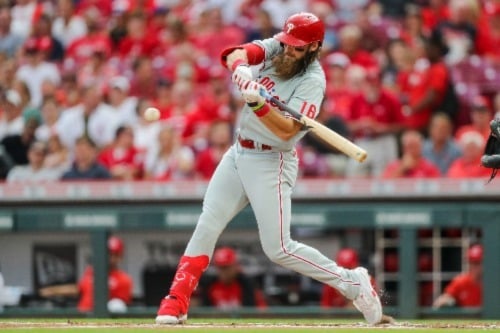 For the Philadelphia Phillies and their competition, front offices either pushed their organizations toward success or disappointment by their decision-making in late July and early August. And even though it affected the clubhouse mood, players realized they did or didn’t give management a reason to go all-in. Sound familiar?

While the Phillies are playing 600 ball or over from June 1, July 1, Aug. 1 and June 24 (Bryce Harper’s last full game), generating hope despite a few speed bumps should be enough for the fans. But one defeat, one poor starting turn, and/or one misperception can cause doubt –or panic– only winning can cure. Yeah, life isn’t a series of nonstop victories.

Hope can be imagined as a domino effect, a chain reaction, each increment making the next increase more feasible… There are moments of fear and doubt that can deflate it. – Jerome Groopman

The moving parts of swaps don’t, usually, offer this spectacular operational view like the moves by Dave Dombrowski, PBO (president of baseball operations). Yes, this was a master at work getting his man and plugging the squad’s three holes. And he read the competition for his deals and a wild-card berth.

For the final postseason spot, Dombrowski saw the Milwaukee Brewers leading the National League Central, but they had an 18-24 stretch to the first half’s end. And this indicated the St. Louis Cardinals would pass them for the divisional lead, plus Brewers management wasn’t going all-in. And the Josh Hader trade accelerated their downward spiral.

Dombrowski knew the normal St. Louis plan would be plugging holes, except for a workable cost for a superstar. Naturally, the Cards added southpaws Jose Quintana and Jordan Montgomery to their rotation, and neither were among the best available arms in late July. I saw the St. Louis swaps after the fact, but Milwaukee had been obvious.

Meanwhile, the Fightins are continuing to play over .600 ball: They earned the execs’ support to pick up difference-making talent for the stretch drive. And they also scored the tie-breakers over the Cardinals, Brewers and San Diego Padres. So, the PBO made necessary deals, not a big splash.

While the Brew Crew was falling out of contention, the San Francisco Giants went 11-23, and both franchises reminded me of previous local squads coming up short at July’s end. And their higher-ups did what past Phils management did by making only cosmetic changes. Now, the PBO increased the team’s spirits, and theirs did the opposite.

The three acquisitions didn’t immediately impress the red pinstripes faithful, but these decisions had been for making the postseason by fixing their shortcomings. Realistically, no single addition was going to lead to being the NLCS favorite. But one swap stands out as more than just a fix: David Robertson.

From the New York Mets, the Chicago Cubs for D-Rob wanted a better pitching prospect –who was on the injured list– but the asking price was too high for them. What’s the importance? When Seranthony Dominguez isn’t available, Robertson gives the Phillies a battle-tested closer for the ninth or 10th.

Yes, the Fightins will have a solid one-two punch for a late-frame advantage when Dominguez returns near Sept. 2. And they have a handful of bullpen pieces to bridge the five-man staff to their top firemen. In fact, they have Brad Hand, Connor Brogdon, Jose Alvarado since his return, and Sam Coonrod.

Noah Syndergaard joined Kyle Gibson as inning-eating hurlers behind Zack Wheeler (an ace), Aaron Nola (a one) and Ranger Suarez (a two). Basically, a playoff club has a four-man staff, so Gibson and Syndergaard could split the fourth contest. Plus it was better to shore their up-the-middle defense and add another closing option.

Since joining the Phils, center fielder Brandon Marsh has averaged .250 with some pop. Plus JT Realmuto, Jean Segura and Bryson Stott complete a solid middle alignment. Yes, the corner spots are high-average or power hitters with adequate gloves, which is why many aren’t fielding wizards.

To engineer these moves, Dombrowski had a ceiling of $250 million AAV (average annual value) on a $230 million CBT (competitive-balance threshold) to work with. And he is at $247 million AAV with a 20 percent tax on $17 million ($3.4 million), and the PBO will have another shot with a 30 percent penalty in 2023.

Basically, there are two October types: the loaded roster like the 2011 squad and the hot team entering the postseason. The ’22 Fightins fall into the second category even if they could add a two-slot starter, a .300-hitting center fielder with flawless defense, and two closers. Yes, the cost would be astronomical.

It would also require moving the Phillies top pitching prospects (plural), and those stars were probably on contending clubs. Moreover, many October standouts are unlikely heroes on hard-charging teams. And that’s why owners put roadblocks in place: The hot franchise would get the second-or-third wild card and play three away games.

Strategically, Dombrowski dealt a top MiLB catcher for a young, promising center fielder, who has offensive ability and five full years of control. And he knew the Los Angeles Angels needed a center field replacement, so he offered Mickey Moniak and an absorption of Syndergaard’s $7.4 million. Yes, The PBO earns $4 million annually to win.

The red pinstripes still have Mick Abel, Andrew Painter and Griff McGarry. However, Spencer Howard has the same struggles for the Texas Rangers. And Moniak had two shots but struck out in 24 of 60 at-bats. Meanwhile, past hopefuls Nick Pivetta and Vince Velasquez aren’t better elsewhere.

For 2022, the good guys have defeated aces Sandy Alcantara and Max Scherzer, plus they handed blown saves to Hader and Raisel Iglesias. And the Phils had taken three of four from the Los Angeles Dodgers in their park, plus they bested the Cardinals, Padres and Brewers. Unfortunately, many locals only consider losing to the Mets as the playoff yardstick.

And even though the Fightins have a Metropolitans problem, Harper in the middle of the order should make a huge difference against top-tier contenders. Realistically, winning series is the goal, and suffering one defeat in a three-game set isn’t season-ending. So, what can the Phils faithful expect in October? A gambler’s chance!