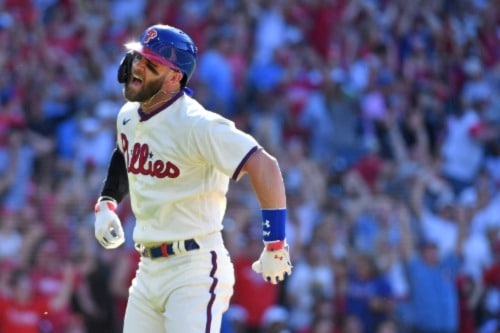 While many Philadelphia Phillies faithful jot down lineups with Bryce Harper, the roster will also have two additional players to complete the full 162 before the Wild Card Series. And some youngsters are probably making the decisions more difficult than Dave Dombrowski, PBO (president of baseball operations), expected.

When an exec reviews his September and postseason rosters, he considers the power, speed, clutch hitting, and energy a reserve offers the best shot at Phillies victories. Yes, pinch-hit homers in critical situations are probably atop Dombrowski’s wish list along with solid late-inning defensive replacements. Pick one?

“An expert is someone who has succeeded in making decisions and judgements simpler through knowing what to pay attention to and what to ignore.” – Edward de Bono

While armchair GMs dissect the final 26, there must be three benchwarmers besides backup catcher Garrett Stubbs because 13 hurlers and nine regulars total 22 of 26 slots. So, the Fightins will need an infielder, outfielder, and power bat to pinch-hit. Did you notice who’s been playing left field lately? Yeah, now you know why versatility has importance.

Zack Wheeler reportedly believed he could pitch through the discomfort and pain, but management knew they couldn’t eliminate the forearm inflammation without prolonged treatment. Realistically, he won’t face the Arizona Diamondbacks in Phoenix. Translation: The ace will only miss a second turn.

Before Wheeler is eligible to return, Seranthony Dominguez will be back around Sept. 2, and the Phils can carry 14 pitchers on the 28-man roster. So, no relievers will go to make room for the flamethrower, and either Dominguez or David Robertson will close. It turns out that trade may save the red pinstripes’ October.

Despite naysayers wanting a different leadoff man, skipper Rob Thomson isn’t likely to make any changes to the Phillies playing over .600 ball since June 1. Plus Kyle Schwarber reportedly prefers the one hole and is hitting .228 with 24 bombs and 50 RBIs since June 1: a pace of 48 blasts and 100 RBIs.

In the two spot, Rhys Hoskins is averaging .264 since June 1 with 18 round-trippers and 41 RBIs: a projection to 36 long balls and 82 RBIs. And Thomson obviously believes in stability because he is reluctant to change things. But can you blame him with this winning consistency?

With the benefit of Harper behind him, Alec Bohm becomes more dangerous to drive in runs or be on base for Harper. Presently, Bohm has a .324 mark for the second half, and the opposition can’t initiate a shift because he hits to all fields. Tough to defend and pitch to.

If any fan has doubts about Harper’s affect on the Fightins, he’s bringing his hair-on-fire enthusiasm to a lineup with Bryson Stott and Jean Segura in the order’s bottom third. Plus Harper returned to a .318 record, 15 home runs and 48 RBIs for almost half a campaign: a pace of 30 four-baggers and 96 RBIs. Conclusion: Add an MVP to this lineup.

Slotting fifth, JT Realmuto is averaging .290 since June 1 with 11 homers and 48 RBIs: a pace of 22 blasts and 96 RBIs. Again, he will continue hitting behind a fresh Harper and before a rejuvenated Nick Castellanos. And we’ll enjoy the full extent of Dombrowski’s offense heading into the homestretch.

Since July 1, Castellanos is batting .291 with five long balls and 21 RBIs. And even though he is averaging 15 four-baggers and 63 RBIs, he is also contributing by forcing the opposition to pitch to the regulars around him. So, he could finish near 20 round-trippers and 75 RBIs.

Stott is perhaps the future leadoff man for the Phils, and the quick study has utilized his extended opportunity to claim the shortstop job. In fact, he’s averaging .285 for the second half, contributing in the bottom third and regularly giving Schwarber RBI situations. Moreover, he’s a solid, versatile glove at short, third and second.

When Segura is your eight-hole bat, he offers Schwarber and Hoskins RBI shots most lineup bottoms don’t. Like Harper, he’s fresh and has his sights set on his first playoff games. And his glove work is a solid piece of the red pinstripes’ up-the-middle defense, which Dombrowski completed with the Brandon Marsh acquisition.

Being the easiest out in a deadly lineup, Marsh was averaging .250 here before returning over the weekend. Basically, he could receive more than one pitch to hit in an at-bat, but his primary purpose is covering the grass due to Schwarber’s and Castellaneos’ limitations. That stated, he has the potential to hit .250 with 15-homer power.

Phillies Record (and all stats) through Aug. 28:

Unlike September’s past, only a reliever and a utility man will bring the active roster to 28. And Dominguez will be the bullpen piece, barring any injuries. Meanwhile, Darick Hall will be ready to be the left-handed thump off the bench. In October, one reliever and one reserve will not be on the Wild Card Series roster without new health issues.

While right-hander Nick Nelson is probably not on the wild-card roster, Matt Vierling, Nick Maton and Edmundo Sosa will fill three slots if Hall struggles with pinch-hitting. But the slugger has 21 Triple-A bombs and nine for the Phillies, plus he isn’t sitting for two weeks. .

For the other two jobs, Vierling has some pop, Maton brings energy to a mostly veteran group, and Sosa’s leather could prevent a critical run at the right time. Basically, Maton is averaging .313 and can also play left field. Translation: These are the players vying for serious October baseball after Labor Day.

Well, the locals have been clamoring for a playoff berth, and the tiebreakers probably won’t matter, barring a sustained winning streak by the San Diego Padres. But the October mountain is steep: three away games in Atlanta, Queens or St. Louis. So, what won’t it be? Easy nor impossible!

NEXT: Domino Effect of the Trading Deadline