Davion Taylor Expected Back To Round Out Practice Squad 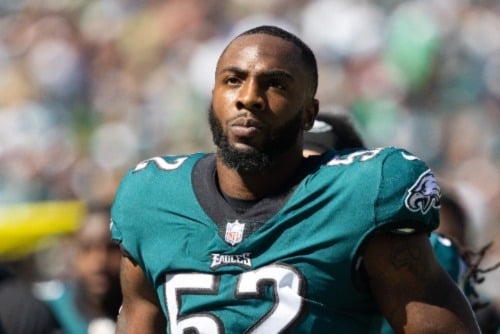 For the first time in the 2022 season, the Eagles are expected to have a full practice squad.

NBC Sports Philly’s Dave Zangaro reports that Davion Taylor, who was released yesterday by the team, is expected back on the practice squad.

Taylor had a pretty rough preseason, showing that he was still a raw player as a result from his limited experience playing the game.

Taylor has the speed and athleticism that could make him great, but his reactions throughout the preseason were delayed and his inability to recognize plays and crash on the runner or routes often left him in a position where the opposing runners were able to beat him to an edge.

A third-round pick in the 2020 Draft, Taylor was certainly known to be a project. Two years later, however, that project has not paid off what the Eagles were hoping as he’s only played significant defensive snaps in six games.

While the 2020 and 2021 Eagles certainly had room to keep a project at linebacker, the position is much improved. With Hasson Reddick, Kyzir White, TJ Edwards and Nakobe Dean topping the depth chart, those linebacker positions for the Birds are in shorter supply.

The practice squad may actually be the best place for Taylor right now since it allows him to continue to practice and develop with the team, but he is no longer being looked at by the fanbase as someone who needs to immediately contribute.

Taylor is the 17th member of the practice squad, an extra member that the team can utilize beyond the typical 16-person limit thanks to the international exemption that Matt Leo has.