2022 Phillies: Heart and Soul or Heartbreaker 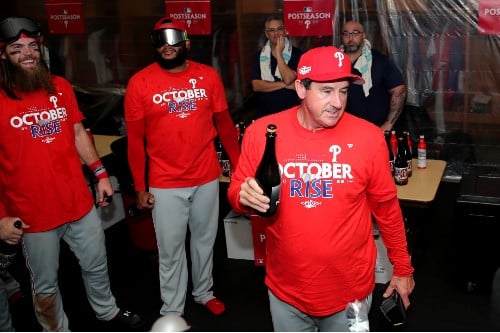 The Philadelphia Phillies have a solid one-two punch atop the rotation and a dangerous offense: It can explode in any inning. But closing out the opposition will determine advancing past the National League Championship Series or playing their final games. Therefore, relievers are important for the red pinstripes to fly a 2022 NL pennant.

The Phillies uniformed management has a relief corps project regarding the final three frames. Yes, they have two flamethrowers, a former closer (or two), three starters in the pen, and three other relievers. The key, though, is assembling a good mix at the right time, while naysayers wait to pounce. Heartburn-inducing expectations?

“Each player must accept the cards life deals him or her: but once they are in hand, he or she alone must decide how to play the cards in order to win the game.” – Voltaire

This summer, Major League Baseball has come full circle from 1993, which influenced the 1994 CBA (collective bargaining agreement). But the MLB created the wild card to correct for the top two winning clubs being in the same division. Yet, we still got to a similar outcome. Both the Fightins and the San Diego Padres are wild cards.

Ergo, owners wanted franchises with over 100 triumphs to compete in the World Series and increase their bottom lines as well. The wild-card team, unfortunately, has been hot at the right time, but even having a Wild Card Game didn’t stop the 2019 Washington Nationals. Now, the Braves, New York Mets and Los Angeles Dodgers are home.

A seven-contest set is beginning for the Phils in Southern California: four battles at most in ideal weather. Unlike the previous series, though, there’s a small error margin, and one mistake won’t derail the red pinstripes’ run. But both organizations can set their rotations after their three wins.

With three solid starters and a potent offense, the bullpen is the big if, and it comes more into focus with each contest. Clubs rank pitchers according to their control: It can determine an ace from a five-slot arm. In the pen, it goes from closing types for the last three frames, fill-ins for unavailable late-inning hurlers, and middle relievers.

An elite fireman works the hardest part of the opposition’s lineup in the seventh, eighth or ninth and is successful at a 90 percent clip annually. However, baseball lifers expect four acceptable outings out of five: 75-80 percent for the reliever’s entire campaign. And that’s the rational yardstick.

For doubting Thomases, one defeat can temporarily determine a 162, plus they can find every nit to pick. Meanwhile, the Phillies are competing for the NL pennant or more for their patrons. In the moment, though, some fans are emotional about losses and enjoy relief with victories, but more hurlers in a battle increases the chances of one faltering.

* Robertson may be available if the Phillies continue their run.

Numbers take inherited runners into consideration with a running tally.

David Robertson could start working off a mound and believes he can be ready for the championship series. Ergo, one moundsman will not be one of 13 total. A no-brainer, no? No, Kyle Gibson can work multiple innings because there’s no automatic runner after the ninth frame. And there was an 18-inning affair in the American League.

Even though the locals must exhale after every out, Seranthony Dominguez has 18 satisfactory performances (14 good) out of 22 for 81.8 percent in the second half and the postseason. Ergo, he’s obviously working on his command because he’s been money so far.

Have you heard the Jose chants for Jose Alvarado at the Bank? Well, he’s averaging 87.1 percent for serviceable appearances since the All-Star break to now: 23 good and four acceptable out of 31 total. But the lefty working more than one frame has been a gamble. Lately, he prefers champagne, cigars and living large!

Zack Eflin has not allowed a free pass as a reliever in his 11 opportunities, but overall he’s adequate at 72.7 percent. Moreover, that’s why he was closing: They had to hit their way on. But keep in mind, he’s working high-leverage situations, not middle relief. Therefore, we’ll see how skipper Rob Thomson deploys him against the Pads.

Although Brad Hand has 15 satisfactory chances out of 21 (11 good), he has been solid in all three playoff appearances. And he’s no stranger to late-inning usage. That stated, he’s the fourth of four in the bullpen rotation, but he’s the second left-hander at the pen’s backend: He has an important role and has been nails in the postseason.

Numbers take inherited runners into consideration with a running tally.

If Robertson* is on the NLCS team, Connor Brogdon, Andrew Bellatti or Nick Nelson* won’t be. Remember, Sam Coonrod didn’t make the team after returning from the injured list, so Brogdon isn’t a sure thing. But Nelson hasn’t worked in serious October baseball without a mop-up man required even in lopsided triumphs.

* Robertson has replaced Nelson on the NLCS roster (updated on Oct.18).

If Robertson is ready, the Phils won’t hesitate to activate him. Record-wise, he had 15 good, 4 acceptable and 6 poor performances out of 25: 76 percent. But they were high-leverage situations, plus he has closed playoff games. Ergo, the red pinstripes would have four solid hurlers to hold leads.

The Fightins were the final organization to clinch an MLB postseason berth but the first to make the LCS. Again, a wild card club will be in the Fall Classic with a shot at glory despite the obstacles: The two lowest NL seeds will compete for that honor. And the Nola brothers will be there: pitcher Aaron Nola and catcher Austin Nola.

Yes, 26 franchises have begun their offseason of rest and preparation for 2023, but the Phillies are one of four teams playing for a pennant and an advancement to the World Series. In the playoffs, the red pinstripes were 5-1 against the St. Louis Cardinals and Atlanta. So, how many victories does Topper need? Eight!

NEXT: The Will To Win