Just How Obsessed Are Phillies Fans? 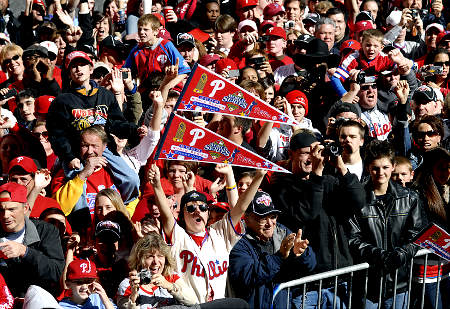 Bundle.com is a personal finance site dedicated to reporting on how people spend and save their money. Recently, I saw on Deadpsin.com that they linked to an article from Bundle. I've posted it again, for your viewing pleasure, right here.

Basically, the article tells us who the top ten most obsessed fan bases are. They generated this list using "fan attendance for home games in 2010, revenue generated last year by each team, and fan obsession with Fantasy Baseball by city," among other statistics.

Pretty interesting stuff. Where did the Phillies land?  #7.

I was pretty surprised we weren't higher on the list (or lower, whatever means that I thought we'd be closer to the top three). I was surprised to see teams like the Twins and Cardinals ahead of us. What contributed to my surprise was the amout of consecutive home sell outs we have in a row, as well as just how many Phillies blog sites are out there. Sure I've never been to St. Louis or Minnesota, and I know they have reputations of being great baseball towns, but I thought the list would look more like this:

What do you think of our fan base being ranked the seventh most "obsessed?" It sure feels like we should be closer to the top considering how every game the Phils play is dissected like it was the fall classic by Phillies fans all over.