Will Phillies have Pete Mackanin enter 2017 as lame duck? 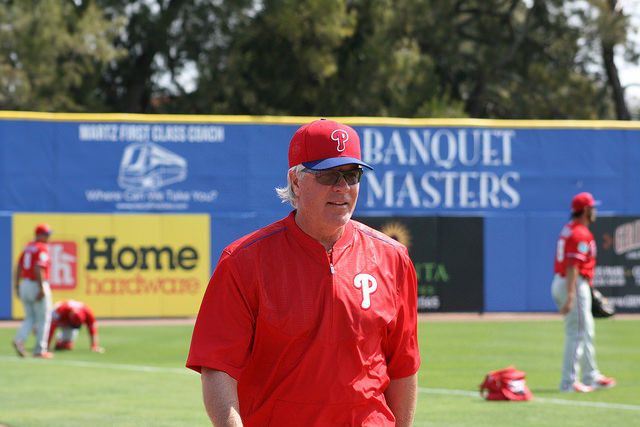 Will the Philadelphia Phillies commit to manager Pete Mackanin past 2017? (Frank Klose/Philliedelphia)

Throughout the course of this week's MLB Winter Meetings, Philadelphia Phillies general manager Matt Klentak and his staff will make various decisions on how the team will look over the next few seasons. Another decision looms for Klentak even after he finishes building the rest of the team's 2017 roster.

2017 is the final guaranteed season of manager Pete Mackanin's contract, but he does have a club option for 2018 that the team could pick up. Whether the team picks it up, has him enter 2017 as a lame duck or attempts to negotiate another deal is one of the most important storylines surrounding the team this offseason.

The Phillies went 71-91 in 2016, Mackanin's first full season at the helm. The season before, they went a league-worst 63-99. However, the team went 37-51 in 2015 when Mackanin became the interim manager, which represented an improvement over what they had done under Ryne Sandberg.

In 2015, a few things were clear. Mackanin was much better at connecting with players than Sandberg had been. He deserved a chance to continue being the manager. And the team was still a few hitters away from realistically being able to gauge how good of a manager Mackanin could be. You could make an argument that even after an improvement in record in 2016, the jury remains very much out on Mackanin's long-term future as manager, even with those same things still holding true.

Mackanin did work well with a bullpen that was very short on depth for much of 2016, though down the stretch it became apparent that Jeanmar Gomez had been overworked. The lack of a strong bullpen, or one that may have to be overused with a young pitching staff, could continue to plague the Phillies in 2017, though it's fair to wonder how much blame Mackanin should shoulder for both a lack of bullpen depth, a young starting rotation and a young lineup.

His long-term future may ultimately be determined by how the team progresses in the first half of 2017. The Phillies could have Mackanin enter 2017 as a lame duck, choosing to see how he and his staff help Maikel Franco and Odubel Herrera, among others, progress as players before making a choice on the option.

The team could also pick up his 2018 option, hoping to avoid what could be a small distraction, knowing that if things really go in a direction that they don't like in 2017, they could afford to fire Mackanin, which would mean paying both him and his successor in 2018.

The expectation here is that the Phillies probably won't commit to Mackanin past 2018 until at least next offseason, if they choose to do so at any point.