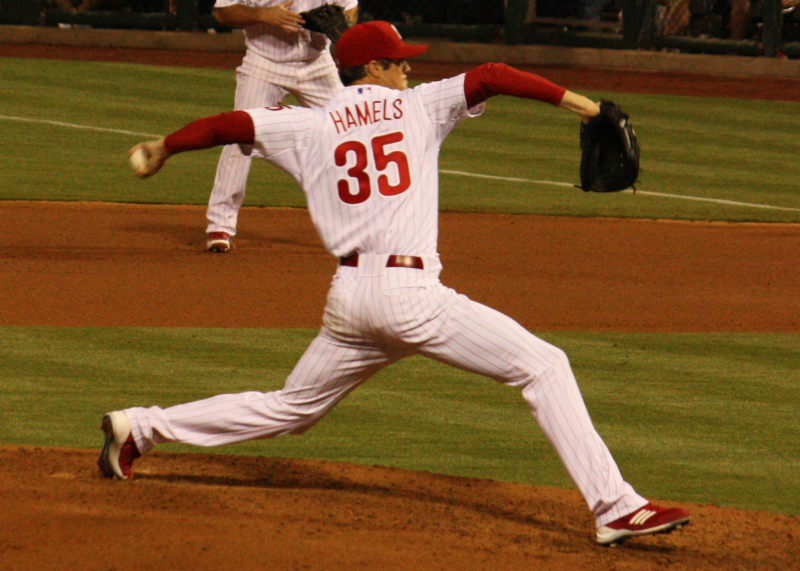 Cole Hamels' exit from Philadelphia may have been a process that took nearly two years, but he left the Phillies on good terms. Hell, in his last start for the team, he threw a no-hitter. But while the currently injured Hamels is focused on helping the Texas Rangers win a competitive American League West, he didn't hesitate to acknowledge the bright future that the Phillies have.

The 2008 World Series MVP spoke to Matt Gelb of The Philadelphia Inquirer prior to the Phillies-Rangers series opening Tuesday, and Hamels complimented the team's future, while not ruling out a potential return to Philadelphia:

"It looks like Philadelphia will have the perfect timing in the next couple of years," Hamels said. "There's no better place to play in front of a sold-out crowd every single day. They really do love baseball. As much as I know it's a football and hockey town, baseball has a significant presence there. Especially when they're winning. They live and breathe it."

Hamels, 33, is currently on the disabled list with a right oblique strain. While some of his advanced numbers hadn't been especially impressive in his five starts in 2017, Hamels had another strong season in 2016. He went 15-5 with a 3.32 ERA, 3.98 FIP and a 3.85 xFIP (per FanGraphs). It wasn't the best season of his career, but it was effective nonetheless, and he also reached the 200 innings mark for the seventh consecutive season and the eighth time in his career.

Trending: The Phillies probably should have retained Charlie Morton

Given his playoff experience, Hamels is the perfect 1:B option to the Rangers' ace Yu Darvish. However, Darvish can become a free-agent after the 2017 season. Jon Daniels has done an incredible job of replenishing talent in Texas over the course of the past decade, but for the sake of this article, it's not impossible that the Rangers aren't contending in a few seasons.

If he's not still pitching at a high level, then there's no point in even entertaining this conversation.

Is there a scenario where Hamels slightly declines, but is still effective and doesn't reach the necessary incentives to trigger his 2019 option? Sure. But if Hamels is only capable of being an effective No. 3 for a contending team by 2019, it's not clear why the Phillies would sign him. The team is deep in young starting pitching, they just appear to lack an ace in the upper levels of their farm system. Signing someone like Hamels, who would turn 36 prior to the 2019 season, wouldn't seem to fill that need for the Phillies.

If Hamels' 2019 option is picked up or becomes guaranteed, then the Phillies wouldn't be able to sign him until prior to the 2020 season. He would be 37 in that season.

The point is, if Hamels is still a front-of-the-line starting pitcher by the end of this decade, the Rangers probably will keep him. If he isn't, then a return to the Phillies would make little on-field sense. The idea of Hamels coming back and finishing his career with the Phillies, while potentially winning another World Series, sounds great, but it's probably not very realistic.