How do Phillies avoid season-long scuffle? Billy Wagner and Brett Myers weigh in... 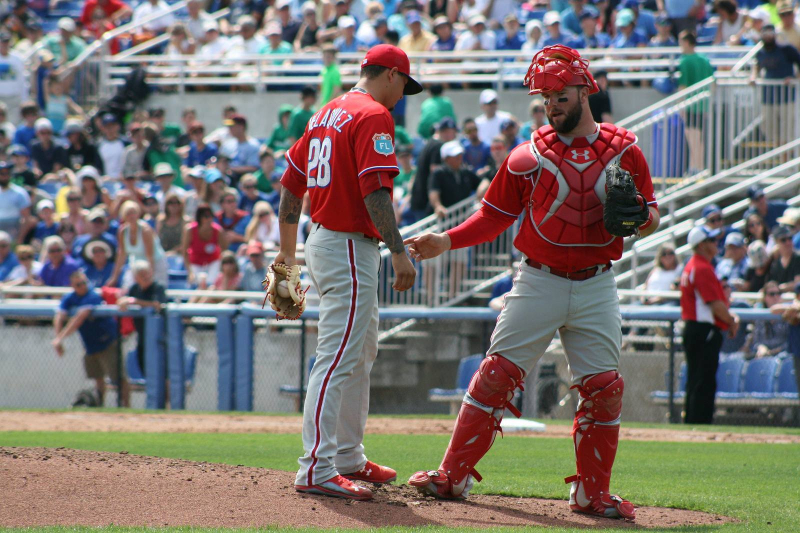 Vince Velasquez and Cameron Rupp have had poor starts to the 2017 season. (Frank Klose/Sports Talk Philly)

It feels safe to say now - the Philadelphia Phillies 6-5 loss on April 29 to the Los Angeles Dodgers was the most painful loss the team has had since Game 5 of the 2011 NLDS, which is saying something when you consider that the Phillies have lost 483 times since their last playoff game. Hector Neris entered the ninth inning with a 5-2 lead, only to give up three consecutive home runs -- all of which were titanic shots -- and see the Dodgers eventually get a 6-5 walk-off win on a fieldable ball.

Even after that loss, the Phillies were 11-11, but it appeared to be a crucial point in the season for Pete Mackanin's young club. Since that game, a team that was on pace to lose 81 games, has gone 6-23, putting them on pace to lose 108 games in 2017.

How do the Phillies -- who many expected to be pushing closer to .500 in 2017 than their second No. 1 pick in three years -- leave behind one of the worst months of May in club history and avoid a season-long tailspin? SportsTalkPhilly.com spoke exclusively to former Phillies Billy Wagner and Brett Myers to get their perspective on how the Phillies break out of this prolonged slump.

Trending: Phillies may try prospect Scott Kingery at other positions

"I'm not sure how you would reset with this type of start," Wagner admitted. "It [turning the season around] begins with confidence and that comes with winning."

Wagner, who recorded 59 saves over two seasons with the Phillies, did say that this type of stretch affects a young team like the Phillies differently than it would a club with veteran influences.

"You never know what you will get with youth, so this is a character test for a few guys," Wagner said of the scuffle. "These games will show you who the baseball players are. Jimmy (Rollins), Chase (Utley) and Pat (Burrell) went through this and they figured it out and learned how to win the World Series."

Myers was a teammate of the trio of 2008 World Series champions that Wagner mentioned. When asked, he said that he believes someone needs to take control in the clubhouse.

"I would say that someone in that clubhouse needs to step up -- if someone hasn't already -- and be a leader and get the guys rallied up," Myers said. "They need to somehow get the passion back for the game, take pride in what they do and don't back down from adversity, because if they do they've already been beaten."

Myers knows what it feels like to struggle when you're expected to be one of the better players on the team. After all, he was sent to Triple-A in July of 2008, after he opened the season as the team's No. 1 starter and turned in a 3-9 record with a 5.84 ERA. He accepted a demotion to the Lehigh Valley IronPigs, came back to the Phillies in August of 2008 and posted a 1.65 ERA that month.

Popular: Lehigh Valley IronPigs finish May with record of 24-5

The Phillies, of course, went on to win the World Series in 2008, with Myers becoming a team leader and even driving home three runs and working an energy-igniting walk against CC Sabathia during the National League playoffs. No one is suggesting that the Phillies are going to have that type of turnaround in 2017, but Myers' energy after he returned from Triple-A made the entire team better. He says that energy can be contagious in both ways, however, which is something the Phillies can't fall victim to.

"Losing takes a lot out of you and if you accept it then you're never going to win," Myers said. "They need to play the game the right way and don't let losing bring them down, because just like hitting it [losing] can be contagious."

2017's Phillies may lack enough talent to compete for the playoffs, but they are not a team that should lose 100 plus games. That makes this a trying time for underperforming talents like Maikel Franco and Odubel Herrera, one that Wagner hopes eventually makes them and the team stronger.

"I hate it for the boys -- it's no fun to go through this," Wagner said. "I hope they get through it and are a tougher team for it."