Eagles Flyers Phillies Sixers Union About Us Write For Us
Cole Hamels: Philadelphia Is a ‘Tremendous Place’ to Start a Career
Foles to Start Week 1 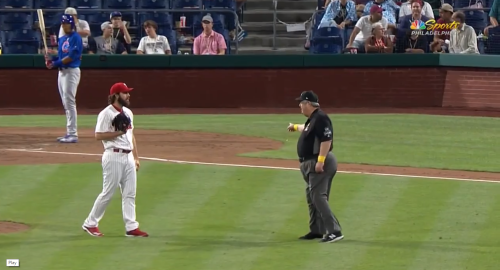 The 2018 Philadelphia Phillies seem to be willing to consider any and all opportunities to obtain a competitive advantage over their opposition in the first season under manager Gabe Kapler. Just on Monday, Phillies Vice President and General Manager Matt Klentak said on MLB Network that the team has "a real advantage in the dugout" based on Kapler's "in-game tactics."

While the Phillies fell in their second of a three-game set against the National League-best Chicago Cubs on Saturday, 7-1, the club could have undergone a unique "competitive advantage" — protesting the game to erase, for now, their 63rd loss of the season.

Update: MLB Rules in Favor of Davis, #Phillies as Reference Cards Deemed Not a ‘Foreign Substance’

With two outs in the top of the eighth inning, Phillies southpaw reliever Austin Davis was 10 pitches into his appearance with the team down, 5-1. Leading up to that moment, Davis got Anthony Rizzo to ground out to third on an 84 mph slider, and Ben Zobrist to strike out swinging, before Kris Bryant hit a first-pitch single to right center.

Addison Russell stepped up to the plate as a pinch-hitter for Kyle Schwarber. As Davis has done for most of the season, according to the Phillies broadcast, Davis, pulled out of his back pocket a scouting card to determine how to best approach the four-year veteran and 2016 All-Star in Russell.

It was not too long after until third base umpire Joe West approached Davis and confiscated his scouting card. Kapler came out for clarification. In his post-game press conference, Kapler said the confiscation was due to a violation of Major League Baseball's Rule 6.02(c)(7).

Rule 6.02(c)(7), listed under "Improper Play, Illegal Action, and Misconduct" and "Pitching Prohibitions," states that a pitcher must not have "on his person, or in his possession, any foreign substance."

An attached comment to the rule additionally states that a pitcher may not "attach anything to either hand, any finger or either wrist," and that the umpire shall determine "if such attachment is indeed a foreign substance for the purpose of Rule 6.02(c)(7)."

Zack Greinke, who's nickname this weekend is "Greinkie", pulls out the ole index card as the Mariners call up a pinch-hitter.

He then gets Ryon Healy to fly out for the 2nd out of the inning. pic.twitter.com/r8hc3zob0k

"I know all the players now carry a cheat sheet like this," West said after the game. "Until the office tells me, I can't let the pitcher do it. I can't let him do it. I saw him take it out and I went, 'What the heck is that?' I said, 'You can have it back after the game, but you can't have it now.' I didn't want to throw him out. I know it's foreign, but he's not trying to cheat."

Davis, in fact, had a "foreign" substance. That is not up for debate, even though Arizona Diamondbacks RHP Zack Greinke has also been seen using a similar scouting card numerous times this season. What was not properly handled, however, is that Davis should have been immediately ejected for violating the rule.

"Obviously we're using it for a scouting report and our outfielders use them, some of our infielders use them, Zack Greinke uses it," Kapler told MLB.com. "It's well documented, and Austin Davis is pulling the card out of his pocket on the mound using it as a reference how to attack the hitters. I think it's actually a really good thing for baseball.

"I don't really quite understand this one. I mean, it's not like he's trying to hide anything. He's standing on the back of the mound, pulling this card out of his pocket and using it to help us attack hitters. Our catchers have them on their wrists. It doesn't make sense to me, but I understand that rules are in place for a reason, and we have to comply."

The MLB rules further states, for any violation of Rule 6.02(c)(2) through Rule 6.02(c)(7), that the violating pitcher "shall be ejected immediately from the game" and receive an automatic suspension of 10 games.

West was not wrong in confiscating the card, however Davis should have also been ejected as a result. Hence, the Phillies could, in theory, protest the game based on West's mishandling of the situation.

MLB.com outlines the protocol for protesting a game:

Managers can protest a game when they allege that the umpires have misapplied the rules. The umpires must be notified of the protest at the time the play in question occurs and before the next pitch or attempted play begins. If the play in question ended the game, a protest can be filed with the league office until noon the following day. No protests are permitted on judgment calls by the umpires.

Major League Baseball's executive vice president of baseball operations later determines whether the protested decision violated the rules, though the game will not be replayed unless it is also determined that the violation adversely affected the protesting team's chances of winning.

It is not clear if the Phillies and Kapler protested the game at the time of the scouting card confiscation.

"This is something I create," Davis told MLB.com "We have our meeting where we go over the hitters. I take that information and put it on a card so I don't have to try and memorize it, and use my mental energy to get ready for the game. Then I just take a glance and go.

"Our analytics department works really, really hard to come up with this stuff for us, and I want to use it because they work all day to come up with stuff to help get guys out. And if I have an answer to get a guy out, I want to know what that is."

West technically did violate the rule for not ejecting Davis. Also, the violation did adversely affect the Phillies' chances to win, because not only could Davis not use the scouting card, he wrongfully remained in the game due to the non-ejection. The left-hander also appeared in the ninth, and allowed two more runs to score on his own error, a RBI double to David Bote, and a RBI single to Javier Baez.

Joe West cited the rule that a pitcher shall have no" foreign substance" on him, hence he took the cheat sheet away. League is going to have to look into it, West said. He hasn't had a pitcher do it but knows others use them.

Rule 6.02(d) Comment states that a warning may be issued in lieu of an ejection if the pitcher unintentionally violates 6.02(c)(2) and (3) only, which state the pitcher shall not "expectorate on the ball, either hand or his glove" nor "rub the ball on his glove, person or clothing," respectively.

No Official Baseball Rule prohibits the pitcher from possessing mere information relative to the opposition.

Davis allowing a pair of runs in the ninth, after the confiscation, surely affected the Phillies' chances to win and the ultimate game outcome. If Davis had his card, would he have allowed two runs in the ninth? The Phillies would only trail 5-1 heading to the bottom half othe inning. The club walked off their game against the Cubs in Friday's series opener in extra innings.

In short, West should not have taken away the card if he were not to fully employ the rule set out by MLB and eject Davis.