By Matt Albertson, Historical Columnist
Rule changes make baseball traditionalists sqwuak an hiss. In recent years, Major League Baseball's willingness to contemplate significant alterations to the game has traditionalists mad – the Buster Posey rule, pitch clocks, relief pitcher's minimum batter rule, and, of course, the designated hitter. For some, it's common knowledge that Abner Doubleday invented baseball way back in Cooperstown, New York in 1839, and while the game has changed some since then, the game has pretty much remained the same for well over one hundred years. They say that's what makes baseball so timeless. Of course, this couldn't be further from the truth, as Doubleday myth has been disproven repeatedly over the past one hundred years and baseball has never remained the same. The one constant through all the years, reader, has been that baseball continued to evolve each and every year. MLB now tests some of its more radical ideas, such as the computerized strike zone, in the independent leagues. Baseball is prepared to enact radical rule changes in an effort to balance the "boredom" conundrum – action vs. inaction combined with the amount of time it takes to complete a game.
The National League and American League have operated under significantly different rule structures twice. The first was between 1901-1902 when the National League approved the "foul strike rule", where a foul counts as a strike until there are two strikes. After serious deliberation, the American League relented and adopted the rule for play beginning in 1903. The leagues operated under the same rules, by and large, until 1973 when the American League adopted the designated hitter for a three-year trial run. No rule change/proposition has received more attention or opinion for so long. It's a bar room discussion/debate. I've debated the rule with a friend at the ballpark through the middle innings. It's great. It's horrible. It's divisive. And It's coming to a National League park near you sooner than you think. 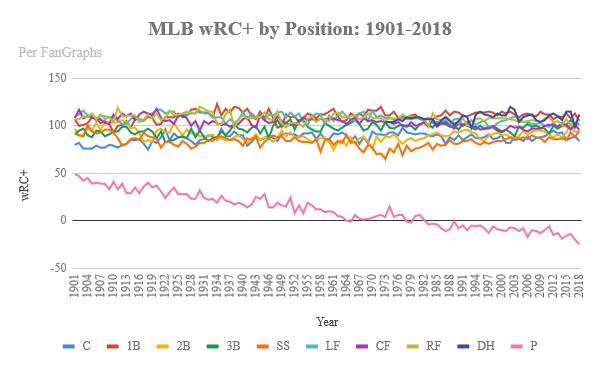 Weighted Runs Created Plus (wRC+) measures offensive value in relation to league average (100).
Since the American League adopted the designated hitter for a trial run in 1973, the American League has outscored the National League by 28,437 runs. Last season, the American League scored 11,859 runs while the National League scored 11,608 runs. The American League could cease play for roughly two and a half season before the National League evens the run total. And since 1973, the National League has scored more runs than the American League only 17 times over the past 46 seasons (1974, 1998-2012). The National League's "rein of run terror" coincided with the steroid era. Home run hitters like Barry Bonds, Mark McGwire, Sammy Sosa, Larry Walker, Gary Sheffield were often tied to steroid use, whether proven or hearsay. That National League power surge helped decrease the gap but the numbers don't lie. The American League scores more runs because the pitcher doesn't have to hit.
In August 1980, National League owners met in Detroit to discuss financial stability. In 1979, only 11 of the 26 clubs made money. In 1978, only eight made money. Commissioner Bowie Kuhn opined "On the one hand, baseball's popularity has never been higher. But in the gloomy science of economics, we don't do so well. We really don't…the biggest problems of the 1980s in my mind are economics, which are not good, and player relations, which are not as good as they should be." Why was this? Free agency officially began after the 1976 season.  Owners were concerned player contract demands would ruin the game and kill profits. Nobody knew how free agency would affect the industry long term. This is possibly why NL owners took a vote on the DH in Detroit in 1980. Baseball was popular, profits are down, and exploding offense generates more interest. Seems logical.
The play was championed by St. Louis' young GM John Claiborne, whom owner August A. Busch Jr. hired away from Boston for his forward thinking ideas. Passage required seven votes. Ruly Carpenter, then-Phillies owner, told then-Vice President Bill Giles to vote for the DH. The club had Greg Luzinski and Keith Moreland and wanted to get both of their bats in the lineup. Unfortunately, both were poor defensively so the DH seemed a logical solution. But prior to the vote, it was announced that if passed, the DH would not go into effect until 1982. The reason was because the players union would need to approve the measure. Giles tried to call Carpenter, who was on a fishing trip, but did not get a hold of him. Unsure of what to do, Giles abstained. Meanwhile, the Pirates were directed to vote as the Phillies voted. Giles explained in his book that this was due to the interstate rivalry between the clubs. Nevertheless, both clubs abstained as did Houston. The final vote was four clubs in favor (Atlanta, New York, St. Louis, and San Diego), five against (Chicago, Cincinnati, Los Angeles, Montreal, and San Francisco, and three abstentions. Commissioner Kuhn was disappointed in the result, given his support of the DH and desire to have both leagues operate under the same rules.
Embed from Getty Images
The club brass were not unified in their desire for the DH. Manager Dallas Green was staunchly against it. "I'm not a DH man…I just don't think it's good for the game of baseball…tell me why it's good for the game." Vice President Paul Owens favored it and said that Ruly Carpenter was neutral. Bill Giles, meanwhile, said in his book that he was not a DH advocate. Regardless, the issue was expected to come up again at the winter meetings. It didn't, however. St. Louis GM John Claiborne, who got the measure on the August docket, was fired a week after the meetings concluded in Detroit and the measure was never taken up again.
In an alternate universe, ponder these scenarios: Pete Incaviglia or Milt Thompson as the DH in 1993, Jim Thome or Ryan Howard as the DH in 2005, Rhys Hoskins or Jay Bruce, or Alec Bohm as the DH in 2020.