Eagles Flyers Phillies Sixers Union About Us Write For Us
Eagles Return Five From IR Ahead Of Cowboys Match-up
Injury Report: Dallas at Philadelphia

For the Philadelphia Phillies faithful, acquiring or re-upping a star has an unknown degree of difficulty for the organization and the regular. Yet failure is an unacceptable excuse the locals aren’t buying, even if they’re willing to hear it. But are the particulars irrelevant?

When some Phillies fans convince themselves a certain player is a must-have for the next campaign, they may experience anger and/or other negative emotions if their heart’s desire signs elsewhere. And the odds for disappointment are high and likely because of a small detail they are unaware of.

“Your emotions are making it difficult for you to accept hard decisions.” - John C. Maxwell

According to managing partner John Middleton, the Fightins lost $100 million due to the pandemic. But don’t assume he is planning major cost cutting for ‘21 because he doesn’t announce his strategy. But keep in mind, he doesn’t want to overpay if he’s anticipating more financial difficulties for 2021.

League-wise, losses were $2.7 billion before interest, taxes, depreciation and amortization. Plus the expectation from national publications is most major league franchises will have a lower payroll next summer. Ergo, small-market clubs won’t be the only ones doing so.

One remaining question is which deep-pocketed teams will be watching from the sidelines. Realistically, those organizations include the New York Yankees who will drop under the $210 million CBT (competitive-balance threshold) in ‘21 to reset their tax rate.

As for the Phils, they must wait until they know which stars are available and their cost in an uncertain market. Yes, bargains should be there for the taking, and Middleton wants serious October triumphs after numerous 162s as an also-ran club.

JT Realmuto is again asking for a sky-high price and a long commitment. But remember, he lost his arbitration case by submitting a number 20 percent above his projected value. In this market, he probably won’t receive a $200 million offer or even a $150 million proposal.

Among the many variables are the games played, the eventual schedule, the attendance, and the competition’s financial losses. And those factors will determine offers the red pinstripes can surpass for the available pitching that could allow them to capitalize on this opportunity.

Rotation-wise, Trevor Bauer, Marcus Stroman, James Paxton, Jake Odorizzi and Tiajuan Walker are free agents. But other starters may be available as salary dumps due only to the financial conditions from 2020 and for 2021. Ergo, the Phillies may have even more appealing talent to bargain for.

For the relief corps, Zack Britton, Liam Hendriks, Alex Colome, Trevor May, Blake Treinen and Justin Wilson are available. But, again, cost-cutting organizations may add other names to a decent list of possibilities for the Fightins’ bullpen.

With Britton, New York (AL) exercised his 2022 club option of $14 million paired with his $13 million for 2021 to avoid a possible opting-out on his part. Instead, the Yankees can now receive something by moving him.

The Bronx Bombers will want young, inexpensive talent, and Scott Kingery at $4 million AAV is under contract for three years with three team options. However, the Phillies may feel dealing Kingery could come back to haunt them. Did COVID-19 cloud his growth?

For Didi Gregorius, he’s earned his shot at free agency, but the coronavirus will limit his offers, campaigns, and dollars. So, he may receive $14-16 million per 162, but the 31-year-old shortstop won’t reach the $20 million annually of the pre-virus days.

The red pinstripes could make him a QO (qualifying offer) of $18.9 million for a one-summer commitment. Yes, some may say it’s too much, but he’s a left-side bat with power to complement Bryce Harper and produce a balanced lineup: a benefit with the three-batter rule.

For 2020-21, the other free-agent shortstops are Andrelton Simmons and Marcus Semien. But Francisco Lindor, Javier Baez, Carlos Correa, Trevor Story and Corey Seager will hit the market for the 2021-22 offseason. Ergo, Gregorius will have a major decision especially if a QO is a drawback.

When the Miami Marlins traded Realmuto to the Phillies, he wanted to set a contractual mark for catchers. He was seeking Buster Posey money: eight seasons at $159 million compared to $184 million for Joe Mauer with the same length.

With the Fightins, Realmuto’s arb estimate was $10.3 million, and the franchise’s proposal was $10 million. However, Realmuto’s request was $12.4 million; ergo, an unrealistic asking price with virtually no chance of success reveals which side was probably holding back before COVID-19.

While most MLB teams will be cost cutting, the above clubs are the main competition to sign Realmuto. That stated, financial losses will depress the All-Star’s offers, but he will only re-up after experiencing a limited market.

Steve Cohen, current New York Mets owner, will be the main challenger for Realmuto’s services. The exec will want to make a big splash, but catching isn’t his team’s only obvious need to compete for.

Declining team options on their relievers, the Cleveland Indians with closer Brad Hand and the Atlanta Braves with Darren O’Day rejected $10 million and $3.5 million respectively.  And other franchises will be making similar choices with the hope to re-sign their stars for less. Yes, more bargains ahead.

Dollars and Surprises ahead for 2021 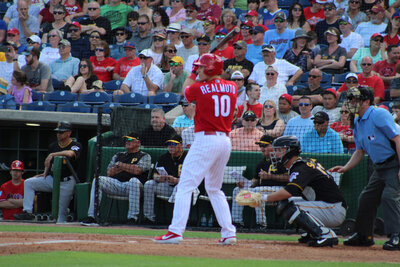 I wouldn’t trust the Phillies to make any good deals with a Interm GM . Unless they sign a experienced GM they can forget 2021

Well, president MacPhail, a former GM, will be making the deals in his final season before retirement, and Rice will only assist in the process.