While Philadelphia Phillies and other divisional fans relive ‘22 from first to last place, others will watch impatiently with the CBA (collective bargaining agreement) looming over and distorting the upcoming 162. Now, some players and organizations are finalizing contracts not wanting to have time limits when normality returns.

With the Miami Marlins making more noise, the Phillies and their National League East foes have situations for going right or wrong especially if a negotiated CBA drags on. But their supporters will bemoan everything not working out satisfactorily, while they point to their rivals’ moves.

“Don't look back. Something might be gaining on you.” - Satchel Paige

As the days toward the Dec. 2 deadline inch closer, execs, players and agents must decide to make or accept an offer now. Or they can wait for the uncertainty to vanish with a successive CBA, but the new deal may or may not be beneficial to some franchises and/or stars.

Analyzing each club reveals their roster holes and financial limitations affected by the CBT (competitive-balance threshold) like an ownership-imposed budget and/or revenue-influenced spending. Yes, each team has warts and won’t fill every opening even if their faithful believe and/or vocalize otherwise.

Speaking of fan bases, they equate no news as total inaction, but negotiations are time-consuming, and many front offices want the same star. But even if overpaying or meeting the asking price are strategies, they can affect other pickups. It’s or, not both!

In pre-pandemic days, offseasons were somewhat predictable, but the unknown always hangs over November through January like an ominous cloud. And every year, the locals in an instant-oriented world are more impatient than many eons ago, when major leaguers advanced a level annually.

Although they aren’t the four aces and Joe Blanton, the Fightins have stud Zack Wheeler, two possible number twos (Aaron Nola and Ranger Suarez) plus two threes in Kyle Gibson and Zach Eflin, who will be 2-4 weeks behind the others. Plus overexpectations only exist with surfacelike observations.

In the pen, the returning four are Jose Alvarado, Seranthony Dominguez, Connor Brogdon and Sam Coonrod; and Dave Dombrowski, POB (president of baseball operations), now turns to Mychal Givens for a late-game role. But Raisel Iglesias may now be more of a priority for the POB after a new CBA.

In 2022, the Phillies may not rely on offenses like summers past with four question marks: center and left fields, shortstop and third base. But comeback candidates Alec Bohm and Didi Gregorius or rookie Bryson Stott will handle the dirt’s left side, and the franchise will add one or two decent outfielders.

After spending on the relief corps and an outfielder or two, the red pinstripes will have four youngsters filling out the bench and perhaps left field. Plus the bullpen could have two mopup men and/or long relievers with minimal experience in the majors.

Every winter, the Phillies faithful fret over their competitors’ rosters and highlight their brightest offensive stars. To illustrate, Freddie Freeman of the Atlanta Braves compares favorably over Rhys Hoskins with bat and glove. However, $200 million for six campaigns will limit the Braves’ offseason finances.

With Mike Soroka, Max Fried, Charlie Morton and Ian Anderson, Atlanta has a solid four with five-slot options, but Soroka last worked only 13 ⅔ innings in 2020. Ergo, adding 100 frames to none will limit his workload, so they’ll need another starter to eat some innings for Soroka. That’s a downside.

The Marlins have a youthful group, which means exuberance with growing pains. No, they didn’t ink Starling Marte after offering him $30 million for three seasons before swapping him to the Oakland A’s. He, however, just signed a $78 million, four-year pact with the Mets; even after the Fish made an aggressive second proposal.

Based on the CBA negotiations and possible transactional delays, the Washington Nationals could end up in the cellar again. Their strategy, though, was to sign free agents to complement Stephen Strasburg, Juan Soto, Josh Bell and top acquired prospects: starter Joshua Grey and receiver Keibert Ruiz.

While they have plenty of financial wiggle room, they would have to overpay for a free agent or two and still have multiple holes in the five-man staff and the batting order. Moreover, they probably won’t take on extensive monetary commitments after unloading big contracts last July.

After Mets owner Steve Cohen had fumed over missing Steven Matz for $11 million a summer, he acquired Max Scherzer for $43.3 million a year to head a rotation with four question marks. And Braves supporters will now expect victories and spending, but they can ask Cole Hamels how that went in 2009 after the rubber-chicken circuit.

In the last two 162s, an NL East team was unexpectedly triumphant in the World Series. Yes, the MLB Commissioner's Trophy went to Washington in 2019 and Atlanta in 2021. But if you’re wondering if the Metropolitans or the Fightins will go for the third one, you might be right, but staying healthy is always a major factor.

Phillies fans might find only 16 familiar faces on Opening Day with a new center fielder, closer, setup man, and seven youngsters who must win their jobs in Clearwater. Realistically, you may make a purchase before entering the Bank because you won’t recognize them without what? A scorecard! 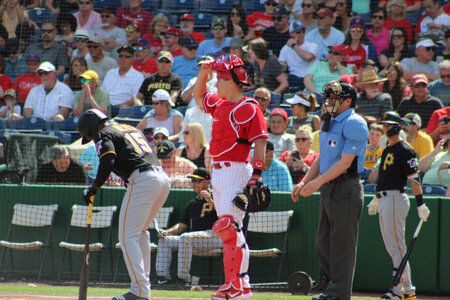 Tad great article, good to read about the competition. All is not as bad as it usually seems with a Philly team. Duck

Too much money, Too little to show.

I'm guessing the Mets' spending has given you some heartburn, but the offseason doesn't end on Dec. 2.