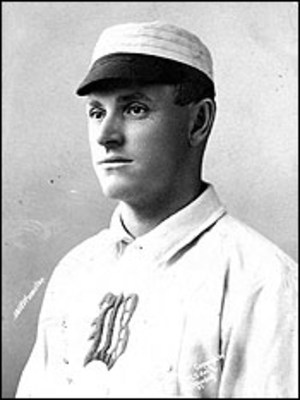 "Slidin' Billy" Hamilton was described by David Fleitz in his excellent SABR biography on Hamilton as "the greatest base stealer and most prolific run scorer of 19th century baseball".

But as with a handful of others on this countdown: Roy Thomas (24), Gavvy Cravath (23), Cy Williams (21), and Sam Thompson (17), his contributions to the Philadelphia Phillies have been lost to time for most contemporary fans.

Hamilton was born in 1866 to Scottish immigrants in Newark, New Jersey. The family moved to Massachusetts when he was four years old, and that was where Hamilton was raised, learning to play baseball as a boy.

He became a top player in the semipro leagues around his new hometown of Clinton, especially known for his speed game. As a 21-year-old in 1887, Hamilton made his professional debut. Less than a year later that speed was his ticket to the big leagues, where he would debut with the American Association's Kansas City Cowboys.

In his first full season in 1889, Hamilton led the American Association with 111 stolen bases. It would be the first of three consecutive seasons and four total over his career in which he would steal more than 100 bases.

At the end of that 1889 campaign, Kansas City folded under the weight of financial problems. Hamilton's contract was sold in January of 1890 to the Philadelphia Phillies organization of the National League.

The Phillies manager at the time was future Hall of Famer Harry Wright. He had taken over the reigns during the team's second-ever season of 1884. Known alternately as the "Quakers" prior to 1889, Wright quickly turned the club into a winner.

After four consecutive winning seasons from 1885-88, the 1889 Phillies had finished a game below the .500 mark. Add that to the fact that a number of players had bolted for the new Players League, and Wright was looking for new talent.

Wright installed Hamilton immediately as his starting left fielder and #2 hitter in the Phillies lineup, and thus began one of the greatest six-year stretches of baseball that any player has ever produced in the history of the franchise.

Hamilton hit .360 with a .468 on-base percentage over those half-dozen seasons playing at the Philadelphia Baseball Grounds, which became known as "Baker Bowl" during his final year with the team.

He registered 1,084 hits during that time, scored 880 runs, had 51 triples, and stole 510 bases. He led the National League in steals four times while with the Phillies. He also lead the circuit in walks three times, and in runs scored three times. In 1891 his 179 hits was also a league-leading total.

Hamilton's speed would lead him to become the Phillies center fielder, and during the 1894 season, he and his outfield mates had a year for the ages. Hamilton hit .403 that year, while right fielder Sam Thompson led the squad with his .415 mark, and left fielder Ed Delahanty hit for a .404 average.

That performance by the Phillies outfield was not just the greatest by any in team history, but also the only time in big league history where all three outfielders finished with a .400 plus batting average, and eventually reached the Baseball Hall of Fame.

Hamilton was pure speed, and was given the green light to run on the bases whenever he wanted. His speed and style earned him the nickname "Slidin' Billy", and Fleitz states that one paper was quoted that he “tried to steal everything in sight, including the umpire.”

His slugging teammate Thompson was quoted as well: "Hamilton’s work on the basepaths was spectacular; he delighted in stealing bases,” and Thompson even went so far as to call Hamilton "more daring and reckless" than Ty Cobb.

With all their offensive firepower, the Phillies could not win a pennant during the five seasons that the three men roamed the Philly outfield together. While each produced impressive numbers every season, the Phils pitching always let them down. The closest they would come would be their final season together when the 1895 Phillies went 78-53 and finished in 3rd place out of 12 teams, 9.5 back of the leaders.

Their best team might have been the 1893 bunch. On August 5, they completed a sweep of Washington and stood in 2nd place, just four games off the pace. However, Hamilton came down with Typhoid fever and missed the rest of the season. Without him, the Phils lost 10 of their next 13 games, falling out of the race.

On November 14, 1895 the Phillies inexplicably dealt Hamilton away to the Boston Beaneaters (now the Atlanta Braves) in exchange for third baseman Billy Nash, who would also become the Phils manager.

A power hitter who had helped lead Boston to three straight pennants from 1891-93, Nash's career suddenly dried up at age 31 in Philadelphia. Hamilton meanwhile would continue to rack up hits and score runs throughout his early 30's over six more years, helping Boston win pennants in 1897 and 1898.

During that 1898 season, The Sporting News commented that Hamilton "has got base stealing down to a science, and no player succeeds in the attempt so often in proportion to times attempted. His slide is wonderful, and often he gets away from the fielder when the latter has the ball in hand waiting to touch him."

The 1901 season would prove his last in the big leagues at age 35. But Hamilton hung around the game in numerous roles for the next 16 years, serving as everything from a minor league manager to a scout back with Boston, and even as part-owner and manager of a team in Worcester. Following the 1917 season, Hamilton left the game for good at age 51.

In a 1937 letter to The Sporting News, Hamilton commented on his own career achievements: "I was and will be the greatest base stealer of all time. I stole over 100 bases on many years and if they ever re-count the record I will get my just reward."

Hamilton was ultimately elected to the Baseball Hall of Fame in 1961, joining his old Phillies teammate Delahanty, who had been selected 16 years earlier. They would be joined by the third member of that great 1890's Phillies outfield, Thompson, in 1974. All three are also on the Phillies Wall of Fame, with Hamilton the last to be honored in 2004.

None of the three would live to see their inductions, however, with all selected by the Veteran's Committee well after their deaths. Hamilton passed away in December of 1940 at age 74 after being confined to bed for most of the last year of his life.

He was survived by his wife, who lived on for another 16 years, as well as four children and two grandchildren. His kids represented him at the July 1961 Hall of Fame ceremonies.

During that 1894 season when he and his outfield mates recorded their .400+ seasons together, the Phillies hosted the Washington Senators in a doubleheader at Philadelphia Baseball Grounds.

The Phils won the opener in a 10-8 slugfest, but it was the second game that would provide Hamilton's memorable moment. Not only did the Phillies win once again with a typical offensive outburst, but the 11-5 victory included a record-tying performance by the center fielder.

Hamilton stole seven bases in that second game to wow the 4,100 fans in attendance. Those seven steals tied the 13-year old big league record that had been set previously by George Gore.

Hamilton produced an 8.2 WAR season in 1894, and had four more WAR seasons of 5+ while with the Phillies. His other season with team resulted in a 4.4 WAR campaign.

First, single season WAR is a primary factor in our rankings. According to WAR's calculations, 2+ WAR is considered a starter, 5+ WAR is All-Star caliber, and 8+ WAR is MVP level. We totaled the number of seasons that a player performed at a 2+ WAR, 5+ WAR, and 8+ WAR level and assigned a set point value for each category, (+1), (+3), and (+5) respectively. For example, in 1980, Mike Schmidt complied an 8.8 WAR. This was counted as a 2+ WAR season, a 5+ WAR season, and an 8+ WAR season. So, for 1980 alone, Mike Schmidt earned (9) points for WAR.
Second, we assigned a point value for amount of years spent with the Phillies. In order to be considered for this list, a player must have been with the organization for a minimum of (5) years.
Next, we assigned point values for being among the top 25 in particular statistical categories, such as batting average, hits, doubles, triples, RBI, home runs, and OPS for hitters, and ERA, Wins, and WPA (wins probability added) for pitchers.
Finally, all statistical categories were totaled up using our point based system and ranked accordingly, with myself and managing editor Tim Kelly reserving the right to move players up the list, within reason. An explanation of why a player is ranked in a certain spot will be provided, as will an overall score breakdown
Topics
Phillies