Eagles Flyers Phillies Sixers About Us Write For Us
Middleton: I'll be disappointed if we aren't playing meaningful games in September
Phillies tab Eshelman, Lively for starts in split-squad action 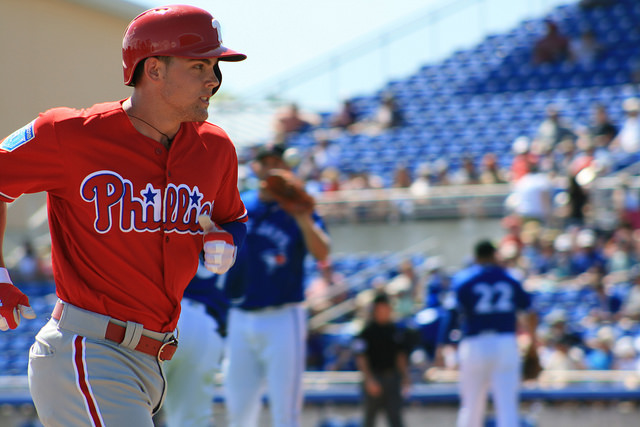 Philadelphia Phillies prospect Scott Kingery isn't going to begin the 2018 season with the major league club. But manager Gabe Kapler sure seems eager to have him at his disposal.

Kapler, who is entering his first season as the Phillies skipper, joined Marc Farzetta and Al Morganti on the SportsRadio 94 WIP Morning Show Friday. Kapler, according to Farzetta, had a grin "from ear to ear" when he was asked to talk about Kingery:

"[I'm] absolutely enthused by Scott Kingery. We were talking about the player plan meetings...I was sharing with you guys that we have these guys come in for player-plan meetings...he came in and devoured the information that we gave him. He's successful on the bases, he drives the ball to the middle of the field, he drives the ball to those alleys, he gets good jumps, he's professional, he's prepared. I ask him 'Hey, Scotty, can you play different positions on the field and how would you feel about that?' [He] absolutely can play center, [he] can play short. He even brought up the idea - this is not actually on the table ever - that he's caught in the past."

Kingery homered in Friday's 9-2 Spring Training win over the Tampa Bay Rays. It was the third consecutive spring game that he's homered in. Between 2017 and 2018, the 23-year-old has 33 major league Spring Training at-bats. In those at-bats, he's slashed .333/.421/.818 with five home runs, seven RBIs and five walks. It's a small sample size, but it's offered Phillies fans a glimpse of someone that the club believes will develop into a core piece.

MLB Pipeline says that Kingery, a 2015 second round pick, is the Phillies second best prospect, behind highly-touted righty Sixto Sanchez. In 2017, Kingery slashed .304/.359/.530 with 26 home runs, 65 RBIs, 41 walks and 29 stolen bases in 543 at-bats between Double-A and Triple-A. He was named the Paul Owens Award winner, as the farm system's best position player. He's seemingly just about ready to appear at the major league level. But not quite.

Kingery, barring injury, will make his major league debut in 2018. It will probably come in May or June. But the Phillies will option Kingery to Triple-A Lehigh Valley to open the season, because it allows them to push his free-agency back a year. There are 183 calendar days in the MLB year. If you're on the major league roster for 172 days or more, you earn a year of service time. It's perhaps a flawed system, but one that teams are smart to take advantage of. Kingery says he isn't upset at the reality facing him.

"I understand, you have the business side of it, how it works where they get an extra year of control," Kingery told MLB.com's Todd Zolecki Thursday. "I understand all that stuff. Obviously, I'll never think negatively about that. I'll try to think positively and say I'll get my time in the minors, where I ended the year. I had some struggles a little bit toward the end, so why not go there and fine-tune them for a little while, and see if I can get better at that so I can be even better and bring that with me for when I finally do get called up?"

Whenever Kingery is eventually called up, it's good that he's willing to be flexible with the position that he plays. His long-term future is probably at second base. But for the time being, the Phillies have one of the 10 best starting second baseman in Cesar Hernandez. Hernandez has led the Phillies in walks three consecutive years, grades out well as a fielder and is under team control through 2020. The Phillies listened to offers for Hernandez for the second consecutive offseason, but evidently didn't find one that they found acceptable. So beginning some time this summer the Phillies will have a nice problem - two potentially elite second baseman will be on their roster.

With this in mind, the Phillies experimented by having Kingery play at third base four times and shortstop twice during the stretch run of the Lehigh Valley IronPigs 2017 season. Those type of experiments will continue in 2018, with Kingery very likely to push Maikel Franco for at-bats at third base when he is eventually promoted.

Whatever position Kingery is playing, if he continues to hit the way that he has in Spring Training, he's going to force his way into the major league lineup sooner rather than later. Kapler is excited about that.

"What makeup...what strong character...what high integrity, man," Kapler waxed to Farzetta and Morganti about Kingery. "This is a loveable force."