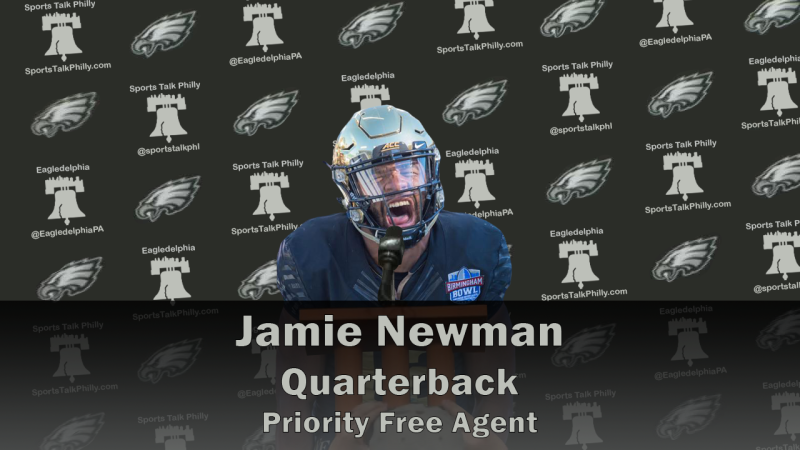 The Eagles may have drafted nine new players they hope can contribute to the team, but they are far from done adding to the group of players that could become the team’s future.

The team, as always, was busy agreeing to deals with players that went undrafted shortly after the close of the seventh round and the 2021 NFL Draft.

Undrafted free agency is where the Eagles will look to land some players at positions they did not get in the draft, so depth receivers, a quarterback linebacker and the secondary are all likely to be some focus areas for the team.

Newman is a quarterback who had an impressive 2019 season where he threw for 2,868 with a 145 rating and had a completion percentage near 61%. He had a 26:11 TD:INT ratio. It was good enough that he was able to transfer to Georgia where he hoped to showcase his skills, but he opted out due to COVID and never played a game for his new team.

Newman is a mobile quarterback with a strong arm, but he is raw and that hurt his draft stock. His play style has drawn comparisons to Jacoby Brissett.

Ausbon led A&M in 2019 with 872 yards, but opted out of his senior season. He projects as a potential slot receiver who lacks speed to break open, but is effective at adjusting to the throw and making a play on the ball at the high point USING HIS 6’2″, 210-pound frame.

An All-American in 2020, Bailey is a five-year player who recorded 151 tackles and 25.5 sacks across those seasons. He suffered a leg injury in 2019 that kept him out most of that season (he appeared in only five games). He has a strong work ethic, but size is the major concern for his translating into the NFL.

Appearing on watch lists for the John Mackey award three times (never a finalist), Stoll had a rather unremarkable career at Nebraska, though it is fair to say there is not much talent on the roster to help anyone stand out on their own. His best season came in 2019, when he made 25 catches for 234 yards and a touchdown. He had just 67 yards in 2020 while dealing with injuries. He had been on a 25-start streak with the team before the injury sidelined him and he came back as a backup when needed while still healing from the injury.

Crider is a smart player who offers versatility on the line (guard and center) and has improved over his career. He will need to improve his strength and ability to move bodies to succeed in the NFL, however. He would likely be more of a project for the Eagles as he does this, but what he currently lacks are things that can be coached and built upon.

Grimes reunites with his former OC Brian Johnson, who now serves as the Eagles quarterbacks coach. Grimes played briefly at Ohio State before a disagreement with the coaches there lead to his transfer to Florida. He played the next three seasons there, totaling 1,464 yards and 14 touchdowns on 100 receptions. He is a player who lacks speed to breakaway, but can go up and get the ball as well as has some high-level route-running skills that probably would have gotten him drafted in a weaker receiving class.

Awosika is a second-team All-American from the 2020 season and was a three-year starter at Buffalo that played both right and left tackle. He will need to improve upon his strength and technique to succeed in the NFL, but Jeff Stoutland has had great success with projects such as this who have size and strength but need some coaching to become solid players (see Jordan Mailata, Nate Herbig, Big V). Buffalo is a run-heavy offense, so his experience is largely in that area, perhaps allowing him to be used in some jumbo packages in short yardage situations should he crack the roster, but he will need much more experience in pass protection to play in the NFL.

This article will be updates with further signings as they are announced.

Click Here To Read About The Eagles Round 1 Selection

Click Here To Read About The Eagles Round 2 Selection

Click Here To Read About The Eagles Round 3 Selection

Click Here To Read About The Eagles Round 4 Selection

Click Here To Read About The Eagles Round 5 Selection

Click Here To Read About The Eagles Final Round 6 Selection

Click Here To Read About The Eagles Round 7 Selection