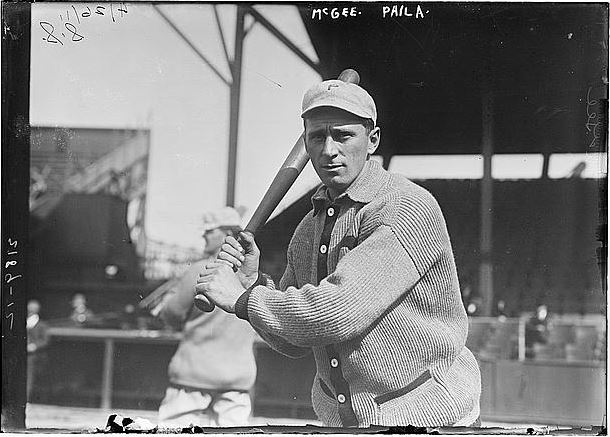 Clarendon, Pennsylvania native Sherwood "Sherry" Magee was a star for the early 20th century Philadelphia Phillies teams and was often heralded as the best all-around player in the National League. He was a true five tool player in an era that focused on station-to-station offense and "small ball". John J. Ward wrote in the April 1915 issue of Baseball Magazine that "Sherwood Magee is a typical player who is and always will be popular. A typical slugger, he gives the public what they prize above all else in a ball player, and that is base hits, and a good all around performer, of the old school." Ward compared Magee's offensive skill and baseball acumen to Ty Cobb, Joe Jackson, and Napoleon Lajoie.

During his 10-year Phillies career, he set the franchise all-time record in stolen bases and ranked among the top ten in nearly every offensive category. His 387 stolen bases with the Phillies still ranks as the fourth most in franchise history. His ability to run combined with his trademark defense in the outfield and consistency among the top hitters in the league at the time are what made him one of the greatest players on his generation.

His hot-headed attitude and play on the field initially made Magee an incredibly popular player in Philadelphia during a time when the Philadelphia's other team - the Athletics - won multiple pennants and World Series championships. In what seems like typical Philadelphia fashion, the Philadelphia fans turned on their star outfielder despite his terrific play. "They cheered his long swats as all fans do, but still they shouted for his release."

In December 1914, Magee was traded to the world champion Boston Braves for Oscar Dugey and Possum Whitted. Unfortunately for Magee, the Phillies won their first National League pennant in 1915 and appeared in their first World Series in team history.

As mentioned earlier, Magee was known for his hot temper as a player, often partaking in scuffles with teammates and umpires both on and off the field. In one instance in 1911, Magee had two strikes on him already and Bill Finneran, a first-year umpire, called the third strike on a pitch that appeared to be high. Magee, unhappy with the call, threw his bat in the air in frustration. Finneran ripped off his mask to toss him from the game prompting him to attack Finneran. Magee knocked Finneran unconscious with a left hook and was escorted from the field. Ironically, Magee is one of few players that went on to become an umpire after retiring.

Magee sported a 2+ WAR over 10 seasons in Philadelphia and in four of those seasons he compiled a 5+ WAR. This nets Magee with 22 points alone. Additionally, Magee ranks 22nd in franchise batting average (.299), eighth in hits, sixth in doubles, second in triples, and ninth in RBI. These rankings added 15 points to Magee's total, while his 11 years spent as a Phillie added another five points to his total.

First, single season WAR is a primary factor in our rankings. According to WAR's calculations, 2+ WAR is considered a starter, 5+ WAR is All-Star caliber, and 8+ WAR is MVP level.
We totaled the number of seasons that a player performed at a 2+ WAR, 5+ WAR, and 8+ WAR level and assigned a set point value for each category, (+1), (+3), and (+5) respectively.
For example, in 1980, Mike Schmidt complied an 8.8 WAR. This was counted as a 2+ WAR season, a 5+ WAR season, and an 8+ WAR season. So, for 1980 alone, Mike Schmidt earned (9) points for WAR.
Second, we assigned a point value for amount of years spent with the Phillies. In order to be considered for this list, a player must have been with the organization for a minimum of (5) years.
Next, we assigned point values for being among the top 25 in particular statistical categories, such as batting average, hits, doubles, triples, RBI, home runs, and OPS for hitters, and ERA, Wins, and WPA (wins probability added) for pitchers.
Finally, all statistical categories were totaled up using our point based system and ranked accordingly, with historical columnist Matt Albertson and managing editor Tim Kelly of Sports Talk Philly reserving the right to move players up the list, within reason. An explanation of why a player is ranked in a certain spot will be provided, as will an overall score breakdown.